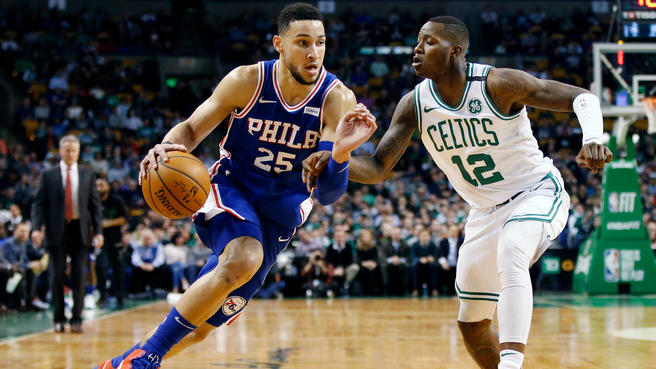 The first three games of this series have been shocking, to say the least. Not even the most die-hard Boston Celtics fans figured they’d be up 3-0 going into Monday night’s game. But on Monday night head coach of the Philadelphia 76ers made a bold move. That move was inserting PG TJ McConnell in for SF Robert Covington.

At first, you kind of shake your head and go what? Inserting a point guard in for a small forward isn’t exactly textbook. But what do they say, desperate times cause for desperate measure right? And boy did that move pay-off, big time. The Celtics had dominated the series on both sides of the ball before this move. However, fan-favorite TJ McConnell stepped up big time for them. The shifty McConnell had a career night shooting 9-12 from the field with 19 points, 7 rebounds and 5 assists.

But most importantly, McConnell stymied “scary” Terry Rozier. Rozier has been a monster ever since Kyrie went down with the knee injury, especially in this series. Rozier was averaging 22 a game while shooting 50% from both the field and behind the arc prior to game 4. Game 4 with McConnell? Rozier just 4-11 from the field for 11 points (1-6 from three) oh yeah and he finally committed a turnover! He hadn’t done that in 114 minutes! Unbelievable.

Now I know Boston fans are gonna shrug this off and just say it’s fine, he just had a bad game we’re still up 3-1. And yes they are certainly in the driver’s seat going home for Game 5, but it’s not all peaches and cream for Boston. If you watched that game you saw McConnell was a complete pest and draped all over Rozier. Something the larger Ben Simmons, who’s normally a great defender, simply couldn’t do and stay with the much smaller Rozier. Rozier was picking his spots and navigating the pick and roll with “average” Al Horford seamlessly with larger guys like Simmons and Covington on him. But McConnell’s height or the lack thereof, combined with grit was a huge factor limiting Rozier.

Now I’m not saying the Sixers are gonna win this series or that Rozier won’t score more then 11 points again in this series. But this move does change a lot in addition to the defense on Rozier.

With McConnell now handling the ball, it not only takes the pressure off Ben Simmons but also frees him up in the post. Now he can use his size at 6″10 and post up smaller guards down low. Of course, he could always do this, but they say every big man needs a guard to get him the ball right? And JJ Reddick quite simply doesn’t have the passing skills of a point guard (as you saw at the end of Game 3 with him just throwing the ball to no one).

So now not only can Simmons take advantage of smaller defenders he can attack the offensive glass. Philadelphia was the number one rebounding team in the regular season and got back to that type of physical play in Game 4 outrebounding Boston 60-53.

With McConnell running the point Embid has also been getting better entry passes and gaining deeper position in the post. The crafty McConnell is a guy I just love, he’s like Matthew Dellavadova if he wasn’t dirty and was good for that matter. We also saw some great interior passing from the likes of Embid and Simmons down low when one got doubled dishing to the other for an easy dunk.

Another thing TJ was able to do was penetrate the stifling Boston defense better than anyone had before him. He also helped control the tempo better than Simmons, who looked rattled at times in Games 1-3. McConnell had five assists and zero turnovers as he controlled the pace well.

One thing that also stands out to me is the lack of 3-point production for Philly. Philly normally lives and dies by the 3 and they still won the game with shooting just 27% from deep (7-26). This shows not only that they didn’t play their best game but also that they no longer have to live and die by the 3.

I know the record is 0-129 when teams are down 0-3 and I know it’s unlikely, but DONT count the Sixers out. If a #16 seed can beat a #1 seed I think it’s plausible a more talented Sixers team can come back and make this a series. That’s the thing too, it’s not like this Sixers team is devoid of talent, in fact, they have immensely more talent than the current beat up Celtics, who also lost Shane Larkin to a shoulder injury in Game 4.

What’s the catch though? The catch is Brad Stevens, the best coach in basketball. Yeah, you heard me, he’s currently better than Pop, although his resume obviously doesn’t compare. He will make some sort of adjustment and likely one that will work. BUT if Boston does not win this Game 5, let me tell you, we are likely looking at a 7 Game series going back to Boston. That’s something no Boston fan would want with lost momentum. I have been very critical of Brett Brown throughout this series but the move to start TJ McConnell is not only genius but also might just be what the Sixers ordered. Stay woke.

SVP’s Post Game Interview with JR Smith is Must See TV
Despite What His Record Tells You, Chris Sale Is Still Dominating
To Top