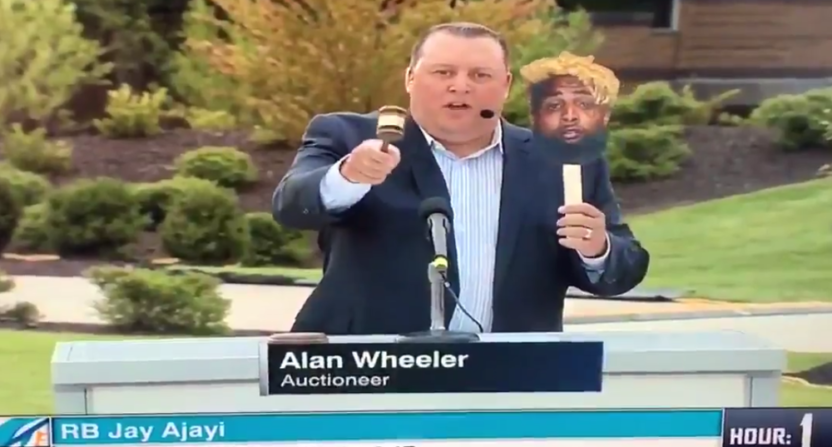 Odell Beckham Jr. tweeted Tuesday that he is “speechless” after watching an ESPN fantasy football auction sketch that’s being criticized for resembling a slave auction — and Beckham is the player on the block. Former Giants defensive lineman Dominique Hamilton tweeted the ESPN clip at Beckham saying:

“Ummm @OBJ_3 what’s up with this racist sketch.”

The auctioneer in the skit holds up a photo of Beckham, who was not physically part of the bit, as he auctions him to the highest bidder. Beckham’s response seemed to indicate he is equally as mortified as many are to see a white man auction a black man’s services on a stage, in front of a predominantly white crowd, no less. There were white players, like Tom Brady and Rob Gronkowski, auctioned off, as well. ESPN has since apologized.

“Auction drafts are a common part of fantasy football, and ESPN’s segments replicated an auction draft with a diverse slate of top professional football players. Without that context, we understand the optics could be portrayed as offensive, and we apologize,” the network said in a statement to USA TODAY Sports.

They’re fucking with us. Like no one’s actually serious about this, right? Is this really where we’ve arrived at in 2017? Listen we try and steer clear of politics on Bleacher Fan, but when politics start to interrupt the sanctity of Fantasy Football, you know, something that actually matters in this world, it’s a problem. I’m not even entirely sure where to begin with this one, I still cannot fully believe that were not being punked here. That’s how unfathomably stupid this is.

The ignorance spewing out of peoples mouth on this is absurd. But hey that’s 2017. Now one of the most common draft formats for a FANTASY FOOTBALL league is being called racist? Nazi’s are racist, white supremacists are racist, the KKK is racist. And fuck all those people. A fantasy football auction draft is not fucking racist. I feel so stupid even responding to this, I just can’t wrap my head around it. There is not one logical or correct viewpoint that ends with anything ESPN did requiring an apology of any kind, let alone being labeled a “racist segment.”

Sure all those groups I listed above are racist. They perpetuate racism on purpose and it’s disgusting. What these players don’t realize is they’re doing the exact same thing, the only difference is they aren’t doing it intentionally. Labeling every little thing as racist perpetuates racism. Everything cannot be racist. There were white guys auctioned off too during the segment. There you go. Entire argument invalid right there. I did it in one sentence. I won, the argument’s done. Settled. Discussed and concluded on. The defense rests. The jury came to a unanimous decision after deliberating for four and half seconds.

Yes, they auctioned off a black guy, they also auctioned off white guys, because that’s what you do in an auction draft. How is this different from the actual NFL Draft? Just because the dollar value of each pick is pre-assigned? That doesn’t make it any different from a moral standpoint. And a moral standpoint is the basis of these players entire argument. He’s a top tier player in the NFL. Most top tier guys in the NFL are black. That’s simply a fact. What would the comments have been if they auctioned off only the top 10 white players during the segment?

I couldn’t be more in favor of equal rights, it’s disappointing that doesn’t go without saying today, but god damn, choose your fucking battles. This is the ant hill you really wanna die fighting on Odell? Where were you every year since the existence of Fantasy Football auction drafts? They’ve only been around for, oh wait, pretty much your entire fucking life.

Condemn things for being racist that is actually racist. In this scenario just shut your mouth, open up your laptop, and join an ESPN Fantasy Football auction draft, just like every other Joe Schmoe in America that will never get the real chance to be an NFL General Manager. People are just trying to live out a fantasy through a platform that brings together hundreds of millions of people across the globe. Fantasy Football doesn’t discriminate. It doesn’t care if you’re black, white, yellow, brown or polka dots when your QB goes down for the year in week 2. People from every race, creed, color, and religion play fantasy football. You should be celebrating something that unites people like that, not incorrectly shunning it. At the end of the day, isn’t that your goal? Unity and equality? It sure should be. Recognize Fantasy Football for providing that, it deserves it and so do the great people of America that enjoy playing it.