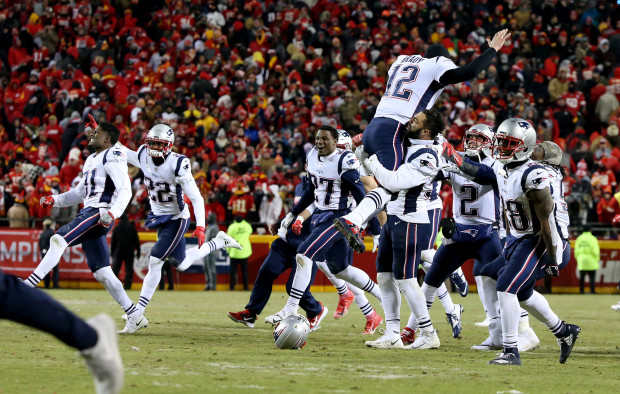 Well, well, well, would you look at that, the Patriots are back in the Super Bowl for a third straight year.

After an all-time classic game this past Sunday at Arrowhead Stadium, where the Patriots won 37-31 in overtime, Tom Brady and the Pats will be looking for their sixth championship, a feat that would tie the Steelers record for most Super Bowl championships in NFL history.

Let that sink in, if the Patriots win, Brady will have as many Super Bowl rings as the franchise with the most Super Bowl wins.

It is pretty widely accepted that Brady is already the greatest quarterback of all time, but with this being his ninth Super Bowl appearance, which is already a historic accomplishment, a sixth Super Bowl win would really put him in a class of his own.

Before we start talking about Super Bowl wins though, we need to address what we all witnessed on the field Sunday.

It’s a tale as old as time, the Pats are down with under two minutes to go, and the ball is in TB12’s hands, do I need to continue? We all know he’s going to win the game.

Although he did lead the drive down the field to score to go up three points, they did leave the Chiefs with time on the clock. Unfortunately for Pats fans, “Showtime Mahomes” wasn’t ready to go home yet, and lead a drive of his own to put the Chiefs in field goal range to tie the game and force overtime.

After a historic 38 point fourth quarter, everybody knew that whoever won this coin flip was going to drive down the field and win the game, fortunately for the Pats fans, it was Tommy Touchdown who would be getting the ball to start.

And just like that in four minutes and 52 seconds, they marched down the field while converting on three straight third downs to set up Rex Burkhead for his second touchdown of the day and the game winning score.

A lot has changed for the Rams since then. What was once known as the greatest show on turf, now has a new young face as a head coach, their franchise quarterback, and a devastating pass rush. As for the not much has changed, except Brady and Belichick have won four more titles and appeared in seven total Super Bowls since February of 2002.

Although the Rams reached the Super Bowl surrounded by controversy after a non-call on a blatant pass interference that would have set up the Saints for a game winning field goal with just seconds left on the clock, they still were tied for best record in the NFC this season and are a powerhouse both offensively and defensively.

This will no doubt be an action packed and must watch football game on February 3rd and it can’t come soon enough.