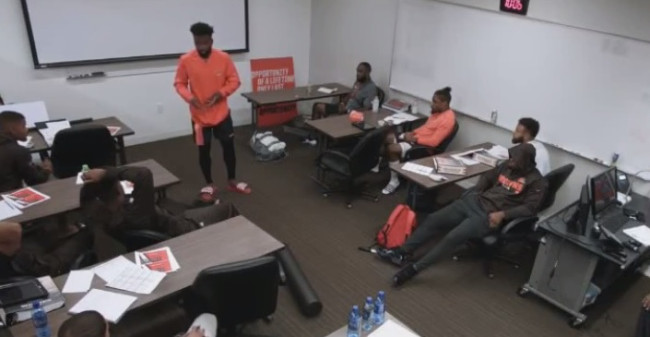 The Browns have been a joke for a long time now. We’re approaching two decades here. The past two seasons have been one of the rock bottom stretches, going 1-31 in that time. Just putrid. A great first round pick in Miles Garret last year, highly touted first and fourth overall picks Baker Mayfield and Denzel Ward and a slew of free agent signings and trade acquisitions this summer, it’s put up or shut up time for the Browns. Like never before. One of the biggest trades the Browns made this summer was for budding star receiver Jarvis Landry.

Jarvis Landry is not the quiet type and he’s not here to continue the losing ways of the Browns. We learned this quickly in the premiere episode of HBO’s Hard Knocks. The effect of Hard Knocks on a team has always been questioned, but one thing we know about the Browns this season is, whether they’re good or bad, right now…they’re interesting. Jarvis Landry delivered a speech that will make you want to run through a wall. Here’s Schefty’s official review and the full video:

An HBO spokesman said Browns’ WR Jarvis Landry’s speech that airs tonight “will rank in the top 5 all-time for Hard Knocks. Rex still the clubhouse leader.” So there’s that.

Landry isn’t here for excuses. He isn’t here to talk about the past and he definitely isn’t in training camp to “not practice”. Landry most definitely has a valid point. The trend in the NFL to avoid training camp as much as possible to avoid serious injury in some cases is causing issues in talent and development, but more importantly, in team mindset. If Landry keeps up this intensity and Cleveland still can’t formulate a winning culture, then I’m not so sure there’s any hope for them, ever.

The Internet Roasts Ray Lewis Hall of Fame Bust that Looks Absolutely Nothing Like Him
Welcome to New England Josh Gordon, Now What What Will He be?
To Top