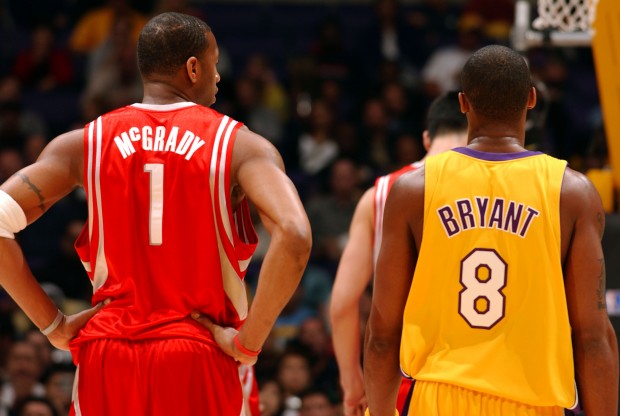 According to former Lakers coach Del Harris, Jerry West was, at least for a short time, enamored with the idea of doing whatever possible to add Tracy McGrady to the Kobe Bryant-Shaquille O’Neal Lakers. Via the New York Times:

As the Lakers’ longtime roster architect, West was famously smitten by the predraft workout performance that Bryant, then 17, unleashed against the longtime Lakers defensive standout Michael Cooper, who was an assistant coach by that point. As Harris tells it, Tracy McGrady had an even more impressive audition for the Lakers one year later, prompting West to make a brief but serious push to try to acquire McGrady’s draft rights and team him with O’Neal and Bryant…

…”McGrady came in the next year with a more mature body and worked out so well that Jerry kind of tooled around with the idea that maybe we should just go ahead and make a deal for whatever it took to get this guy — even though it’d be a step back in the short term — to have two guys like this on the same team.”

Of course, McGrady never played for the Lakers, and that was because the late Jerry Buss, who owned the Lakers at the time, put a stop to the idea — something Harris was fine with.

Harris, himself, also didn’t want to surrender an All-Star like Eddie Jones for McGrady, either, fearing it would take the Lakers out of the title mix. Bryant was the first guard in N.B.A. history to make the jump directly from high school to the pros and working one teenager into a lineup with championship aspirations was already a sizable undertaking. – CBS Sports

Now we’re talking about a Lakers team here that went on to win three championships, so they can’t exactly complain about how things panned out, but goddam, could you imagine if they pulled this deal off? Arguably three of the most dominant offensive players in NBA history all on one squad for the entirety of their primes? It would have been unreal. They would have been a super team before super teams. Not that Shaq and Kobe weren’t a super team by themselves, but anytime you add Tracy McGrady to the mix of any basketball team, they will become exponentially better.

This would have been like the Yankees adding a younger Giancarlo Stanton. Do they need him? Nope. Do they want him? Yup. The rich get richer and the poor get poorer. Now, of course, this all sounds great in hindsight, especially when you see that they only would have had to part with Eddie Jones.

At the time though, this was a huge gamble. T-Mac was coming out of high school and Eddie Jones was a solidified All-Star. The chances of any NBA draft pick, including #1 overall, being a lock for a multi-time all-star are not great. The weariness is understandable, but when you have a guy like Jerry West, whos proven later on to have such a great track record at identifying talent, its disheartening to hear he wasn’t listened to. To think about what we all missed out on witnessing.

Then again, as awesome as it sounds on paper, would it have all worked out? Would they have run into the same ego issues Kobe and Shaq did? Who knows, but either way, T-Mac was a special player and it’s always awesome to watch special players play together. I guess we should just be grateful that we got to witness Kobe and Shaq and T-Mac and Vinsanity. Both duos that will live on forever in highlight reel heaven.