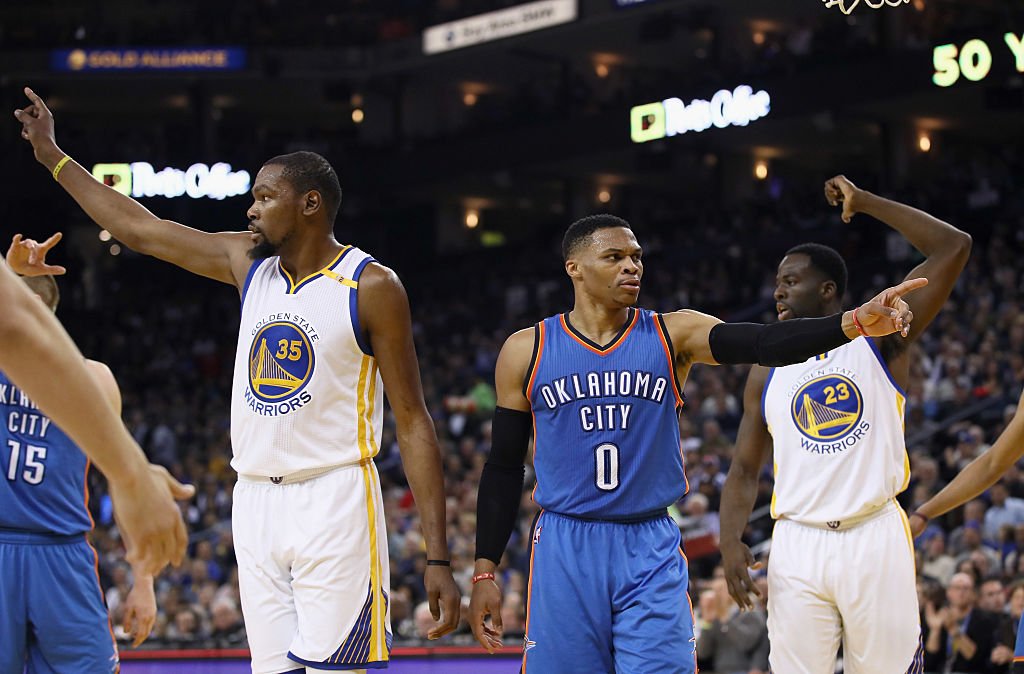 Ah, yes, the time has finally come. Tonight, February 11th at 8 pm ET, Kevin Durant will step foot on the court at Chesapeake Energy Arena, but for the first time in his life, he will not be representing the Oklahoma City Thunder. Instead, he will be wearing the jersey of the Golden State Warriors and be treated as the villain. Hard to ever imagine Kevin Durant, such a nice fun loving community guy as the villain, but yes, he will be treated as such.

This volatile opinion of Durant all began as last season he was on the other side with the Thunder and holding a 3-1 lead over the opponent Warriors at the time. Similar to a now more famous 3-1 lead blown by the very same Warriors in the NBA Finals, this past year, as we know the Thunder blew this one, and I can only imagine how bad it stung the OKC fans. But you know what would sting even worse than that collapse alone? Having your MVP, eight-time all-star and veteran leader walk out on you. And you know what would be even worse than that? Having that player who has been the heart and soul of not only the franchise but the city leave for the super-team Golden State Warriors. The same Warriors they had dead to rights at 3-1 and with just one more win could have changed the entire landscape of the NBA as we know it. Nonetheless, this is where we stand, enter Kevin Durant beloved OKC hero for years, now the villain.

Let me just first say that I’m not a fan that KD has been villainized and will be treated as such, but I do get it. No, I am not an OKC Thunder fan or anything remotely close to it so I will never truly know how they felt when he left, but I can only imagine words such as abandoned, forgotten, second-fiddle, and shallow are some words to start. KD is a great person who has always had a loving relationship with the fans and the community, in fact, he still does do charitable work in OKC, never gotten in trouble off the court and is a class act in my opinion. Still, though, KD knew what the repercussions and fallout of his actions would be, especially being that he saw what happened to LeBron leaving Cleveland and being treated as if he was almost a criminal. Add on the blown lead to the Warriors and it protrudes a sense of “well if you can’t beat ‘em join ‘em, right?” I don’t think that was necessarily the case, given that KD has been cited as saying he didn’t have the family bond or aspect he longed for with his teammates (especially with Russell Westbrook) and that the Warriors had that comradery. I can respect that, and I’m not going to judge him off one decision he thought was best for him and family, but that doesn’t mean the Thunder fans can’t. They have and they will continue to do so tonight. Oh yeah, the fact that he joined the super team Warriors that cumulated the most wins ever at 73 last year may just fuel the fire even more for Thunder fans.

I anticipate loud boos from the crowd, sprinkled in with some cheers and fans showing their support and admiration for a man who gave all he had to a city for eight years, but they will be loudly overshadowed by the boos. I’m sure it will be very bitter sweet for KD as well as emotional. It will be nice to be in his old place and see some old faces, but it must hurt him that everything he worked for essentially is fore not because of one decision to leave for the adversary. I do hope to see some fans give him some love but I get it, they’re still deeply hurt. To each his own.

As for the game, the Warriors enter as it stands as 7.5 point favorites in Vegas, and I’m sure it will be close, for the first half that is. The Thunder just played an intense game against the Cavs Thursday night, but I’m sure that won’t stop Russel Westbrook from giving it his all. Westbrook and Durant have been turned against one another by the media in Durant’s eyes, but it’s easy to see that Russ is spiteful of him leaving and that he’ll bring it tonight, that we do now. Never been a huge fan of Russ off the court, seems very arrogant to me, but nonetheless the guy is one hell of a competitor and STILL averaging a tripled double this far into the year. Russ has been recently downplaying the tension of course lately when asked if he would say anything to KD on the court he said: “I don’t talk to no one on the court”. Oh, Russ, you kill me, you’re better than that kid. Just last time they played the Warriors he was cited as saying “Don’t say wassup to that bitch ass” after having lost to them 121-100 at Oracle Arena. Note-clearly talking here, disproving what he just said. He also said in reference to Zaza Pachulia that “I’m gonna get his ass back” as Pachulia fouled him hard and stood over him during that game. Now I don’t know what that exactly what this means verbatim, but I’ll tell you one thing though words will be said tonight and that might just be the tip of the iceberg. Just sit back and get your popcorn, we’re in for a treat.

As for the second half, I’m sure it will be close at halftime to only see the Warriors pull away in the third and win relatively easily by 10-15 points. What about Kevin Durant you may ask? Kevin Durant will be more than fine, he’s unarguably a top-three player in the world as well as the best scorer in the NBA. Sure, he’ll miss his fair share of shots and the fans will let him hear it when he does, but he’ll also be raining 3’s and doing just about everything else. Oh yeah not to mention two of his top three scoring performances this year are against the Thunder, at 40 and 39 respectively, coincidence? I think not. I anticipate maybe 12-21 shooting for 35points 11 rebounds and 5 assists sounds fair, to boot with one steal and two blocks. It will be a great performance from Durant and the Warriors and I’m sure Westbrook for that matter as well, would surprise me if he didn’t notch another triple double. The Warriors should win the game but regardless this has must-see television written all over it. Be sure to tune in tonight at 8 pm to ABC and watch this all unfold, you won’t regret it.