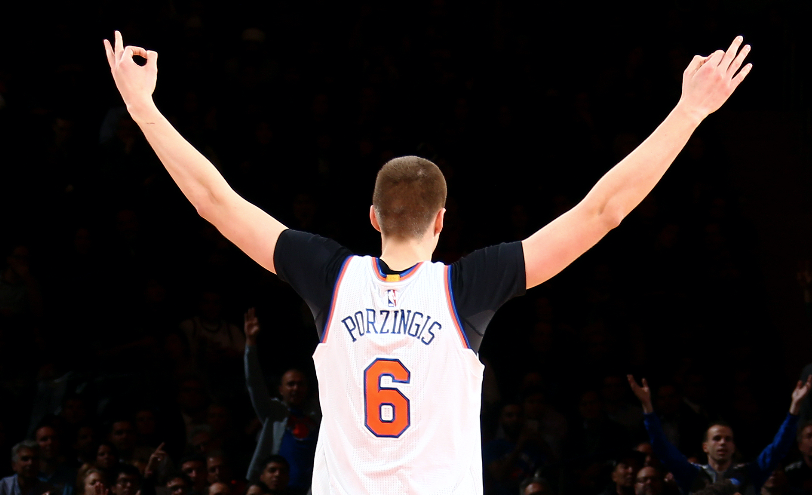 Porzingis had The Garden rockin' in the 4th!

Knicks have won three in a row! pic.twitter.com/bz3WIU52Xh

KP’s savagery is increasing by the hour.

Kristaps Porzingis first impression of New York was being showered with the boo birds on draft night, by the fans of his new team, in the city that he was about to call home. Little did he know, this was the first step of his training, the first stage of his transformation. No, not into a successful NBA player, into a New Yorker. KP answered the call within seconds. Embracing the boos during his first interview. Using the boo’s as fuel and promised to make those same fans have no choice but to cheer for him.

Well, two plus years later and this 7 foot 3 inch Latvian Unicorn prince has done exactly that. Step one complete. Someone tells you that you cant do something, you say “fuck you, watch this.” A trait this city is proud to embrace. A trait that personifies this city and its residents. New York is made up of people from all over the world, from every country and culture on the planet, but one thing they all have in common is that one trait. To never give up, to never back down, never doubt yourself and make sure not a single person ever forgets any of it. It can all be boiled down to “Fuck you, watch this.”

Through the past year with all the drama surrounding Carmelo, KP handled it with class and maturity. He was a great Robin waiting in the wings to take over the franchise from Melo. When Melo was finally dealt to OKC, there were questions if KP was ready. Ten games into the season those questions have been answered loud and clear. Porzingis is 2nd in the NBA in scoring, just broke the Knicks franchise record for most points during the first ten games of a season and is, along with the Greek Freak an early MVP candidate. The Knicks haven’t had a legitimate MVP candidate in 25-30 years. Even Ewing as an MVP is a stretch. Yet again, Porzingis rose to the occasion. Looked at the doubters who said he wasn’t ready to be the Franchise cornerstone and said: “fuck you, watch this.” And boy is everyone watching.

Though the Knicks started off slow at 0-3, They have gone 6-1 since and KP has lead the way in every aspect. Even with KP as the new lead man, the Knicks were expected to be pretty terrible this year. On paper definitely a top 5 worst team in the league. Porzingis has decided that’s not going to happen. He has reignited Madison Square Garden from both ends of the floor. Playing tough hard-nosed defense like the Knicks of the 90’s while dominating on the offensive end with the likes of Bernard King, Walt Frazier and Carmelo.

European players come along with the stereotype of “soft.” Porzingis laughed at that notion and is proving that stereotype wrong on a daily basis. Knicks fans are smart. They notice tough play. They notice the little things, the intricacies of the game. Something most NBA crowds cannot claim. Porzingis has earned that respect from them. A respect not easily garnered.

Now come to the last two games. The final steps in the evolution. Knicks trailing by double digits in the 4th quarter, twice. With a roaring 19 point comeback against the Pacers, KP carried them down the stretch and brought home the impressive win. Then Tuesday night another 11 point deficit entering the final minutes. The unicorn delivered again. Turning Mike Breen into a broken record player with one song and one song only…BANG!

As I mentioned before, none of this was ever actually about him becoming a successful player on the court. He’s proved that. This was about becoming a New Yorker, the king New Yorker. It was the way he did it and the attitude he did it with. The win Monday night and the interview afterward may have seemed funny and simple to most. But to New Yorkers it was initiation. Does he have any doubt that he would ever be able to lead the Knicks to these two great comebacks? Does he ever consider them out of it? Will he let the haters bring down this teams spirit and will?

That’s exactly what this question was about. Even though the masses still don’t think Porzingis or the Knicks are ready, he’s not going to let that affect him. Whether any of it comes true, doesn’t really matter. Porzingis answered the question with a smile and a simple “No” and walked off the court with his head high and being showered with cheers, by the same fans who booed him on draft night.