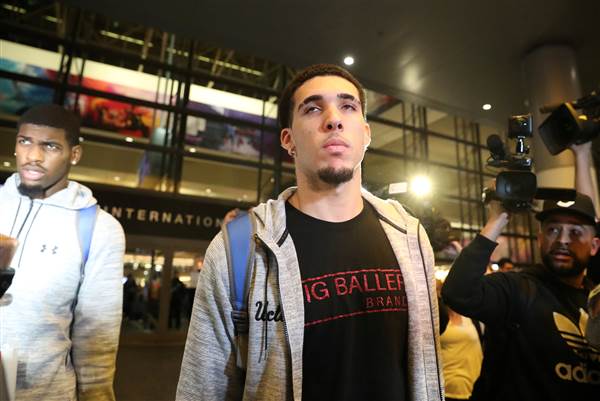 LiAngelo Ball and UCLA teammates safely arrive home at LAX to “anybody have any sunglasses?” 😂

When the story first broke about LiAngelo Ball and his teammates getting pinched for shoplifting in China, I gotta admit my first reaction was a combination of laughing and wow, what a fucking idiot. The kid is a millionaire at 18 years old and goes and does something stupid like this. But then you realize that he is a kid, and kids, do incredibly stupid shit with regularity. Admittedly I never did anything this stupid though. But nevertheless, it’s still an American kid trapped in China. A country that holds over a 99% conviction rate. As dumb as this act was, you never want to see an American kid trapped and detained in a communist country. It seemed appropriate to hold jokes until they were all returned safely to American soil.

Now that’s happened, the jokes can rolllllllllll in. And boy did the media not waste a second. As expected LiAngelo Ball and his two teammates were met with hundreds of reporters. All the TMZ cameras out in full force. Paparazzi triggers at the ready. Of course, all the players are walking through with their heads down staying silent. Shocking to see from a member of the Ball family. Most of the questions thrown their way are standard questions about the incident, along with some basketball questions peppered in. Then at the end, when all logic and sense has failed, one reporter drops the first haymaker joke. “Anyone have any sunglasses?” LOLOLOL.

Perfectly timed, perfectly placed, perfectly said. The regular stuff clearly wasn’t hitting the right chord with them, why not be the Christopher Columbus of jokes? Break the ground? Be the first man to get that first deserving snail on American soil? When the professional path to doing your job seems to be a failure, you might as well get creative. And this guy nails it.