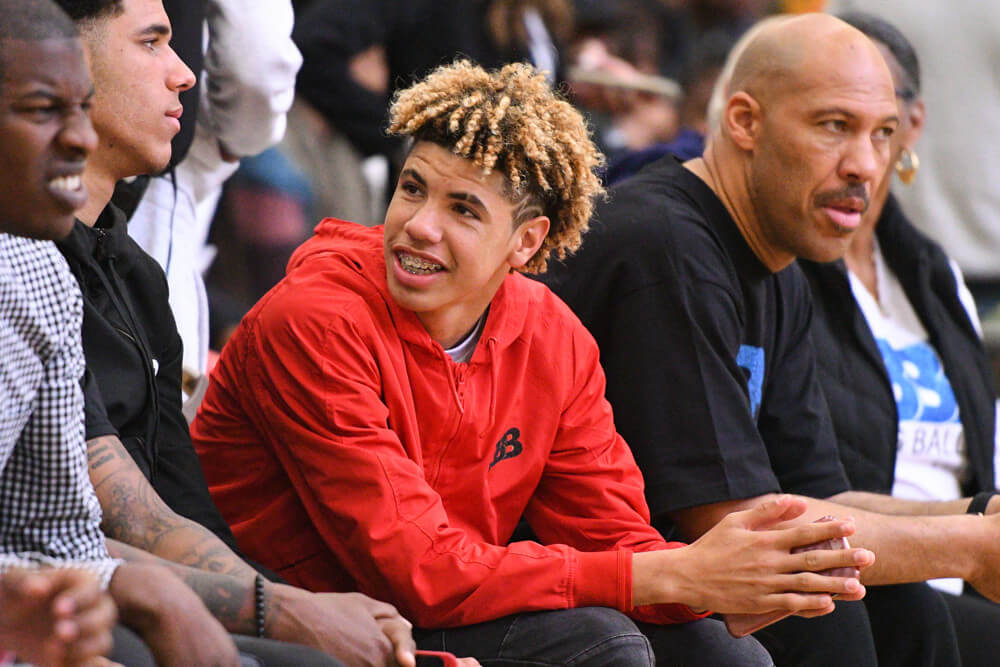 The 16-year-old junior at Chino Hills will be home-schooled and not play for any team, his father, LaVar Ball, said Monday in a phone call. “I’m going to make him the best basketball player ever,” LaVar said. He intends to check him out on Tuesday. LaMelo scored 92 points for Chino Hills in a game last season. Brother Lonzo is the Lakers’ new point guard and brother LiAngelo will be a freshman at UCLA. LaVar had already been concerned about Chino Hills’ new coach, Dennis Latimore, who is the third coach in the last three years for the Huskies. When LaVar was critical of Latimore about a month ago, the coach said he would not respond to his comments. Latimore did not return phone messages on Monday.

“It’s good for Melo,” LaVar said. “Less distractions. He just needs to focus.” Former head Coach Steve Baik, who guided Chino Hills to 35-0 record two seasons ago before leaving for Fairfax, said, “A year ago, a few months ago, I thought this could never happen. I am really disappointed it couldn’t have worked out better for LaMelo and all the players. They’re really good kids. If I knew it was going to end up this way, maybe I wouldn’t have left. I didn’t forsee this happening.”

The next time people will be able to see LaMelo play is next spring in travel ball. “They’ll have to sit back and wait,” LaVar said. Baik said, “In basketball terms, he’s going to be fine. They know what it takes, and they have the right people to tell him the exact things to get better. They’ve done things differently. It’s worked for him. It’s not going to work for everybody.”LaVar said LaMelo still intends to sign with UCLA. The loss of LaMelo from the high school ranks will have a major impact on Southern California basketball. Not only did Chino Hills sell out gyms with the Ball brothers but also competed for championships. – LA Times

Just spoke to LaVar Ball on why he's pulling his youngest son out of HS and home schooling him. pic.twitter.com/nvUprIJnew

I’ve recently switched over to fully all in on everything LaVar Ball. I’ve had my hills and valleys with the way I feel about him, but my feet are firmly planted proudly at the top of Mount LaVar. While this is unconventional, it’s not unheard of. Bryce Harper did essentially the same thing. Except he got his GED and skipped the homeschool thing. You can break this move down from a few angles.

First, this is a precedent being set. LaVar is breaking ground here in basketball development. Creating his own in-house Americanized version of the Europeans youth soccer system. He could be starting a revolution. Changing the way basketball prospects are raised and treated. He could alter the entire way AAU is set up. This could put yet another fracture in the setup of the flawed and useless middleman that is the NCAA. If this experiment pans out, LaVar could create a new alternative to the way phenoms are developed. While I wouldn’t consider LaMelo Ball a phenom, he is ranked in the top 20 nationally for his class and has a scholarship waiting for him at arguably the best basketball program in history.

The second positive angle is the schooling. Oh, you thought him not getting a “real” high school education was gonna be a negative? Lol. Nah, in the words of my favorite athlete who has me blocked on Twitter, Cardale Jones, “I ain’t here to play school.” Neither is LaMelo Ball. Do you know how much of the information I retained from the last two years of high school? I’m going to be generous and say 10%.

If you don’t plan to have a career in math or science. The last two years of high school are fairly useless in terms of real-world applicability. A couple of extra Shakespeare novels and learning about the civil war is nice and all, but do you REALLY need that info to operate successfully in the real world? Of course you don’t. LaMelo Ball most certainly does not. The brain can only learn and absorb so much. It only can allocate so much energy and usage. Using that for things other than basketball just isn’t a smart move at this point for LaMelo.

Now a lot of you are wondering about his education, JUST in case, this all doesn’t work out. He’ll be screwed!? Well, I just took a quick peek and LaMelo Ball has 2.6 Million followers on Instagram. Do you have any idea the potential value of his Instagram account? If you don’t know, It’s in the millions……annually. He already owns a Ferrari and his Dad’s clothing business is doing quite well. Not to mention LaMelo himself just announced his own signature shoe. This kid already prints money. Everyone in his family does. With Lonzo being an actual proven true talent. The Ball money printing machine isn’t going anywhere.

The only downside of this whole thing is, I kinda feel bad for LaMelo. Like, his life is gonna SUCK for the next two years. I’m sure he loves his Dad and all, but there’s gotta be a line on how much LaVar Ball any human can listen to for a consecutive amount of hours. And I’m sure that limit is less than 24 hours. LaMelo is going to be having his Dad teach him in the classroom AND on the basketball court. By the time LaMelo Ball finally lands on campus at UCLA he’s going to be so strung out, that the cocaine habit he’ll inevitably pick up might actually calm his nerves.