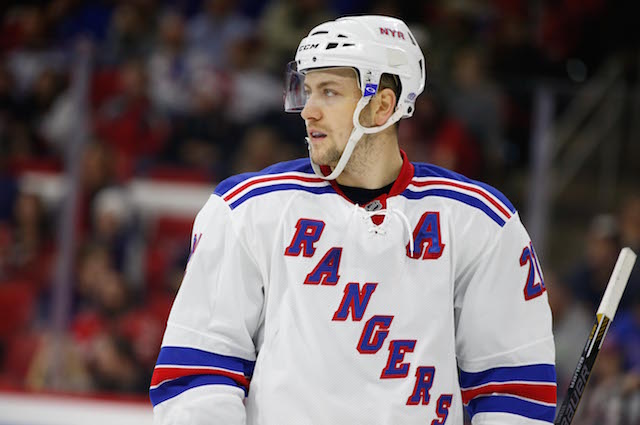 The New York Rangers traded long-time center Derek Stepan Along with backup goaltender Antti Raanta to Arizona for Defensemen Anthony DeAngelo along with the 7th overall pick in this year’s draft. This is basically what the plan was all along.. fix that disaster they call a defense and get younger. Even though the trade makes sense, I hate to see Step leave. Dude has spent his whole career here in NY tallying a total of 515 games played, with 128G and 232A, not too bad for a 7-year tenure. Lets not also forget this absolute gem from Stepan…

Gets me every time… ugh, what a game, what a series.

On to the backup, Antti Raanta. After getting rid of Cam Talbot, I thought the Rangers would be screwed not having a solid backup for the aging Henrik Lundqvist. Luckily the Rangers seem to have an eye for good goalies so the arrival of Antti Raanta wasn’t the end of the world. In fact, Raanta held his own. 27-14-4. I think he’ll be just fine in Arizona.

On to the newcomers: We can’t really say too much since DeAngelo is a rookie and only played half the season, not to mention the Arizona Coyotes were absolutely dreadful this season. He has potential so take that how you will. I think having a young defensive core with leaders like McDonagh is a recipe for success.  DeAngelo had a good season in the OHL where he averaged about a point per game. In his rookie year, he tallied 5 goals and 9 assists, I’ll take that for a rookie who played half a season on a sub par squad.  Also grabbing the 7th overall pick in this year’s draft can’t hurt. This deal is the Rangers to lose. I think if they make the right choices and have the right attitude with DeAngelo, they should be fine.

Now that they finally drafted let’s look at the Swedish center Lias Andersson. From what I’m hearing/seen the kid has great potential and is going to be a strong 2-way player. However, he is not totally there yet. This is a working project that might take a year or two to fully develop. That would usually be fine, but in the Rangers case with an aging elite goaltender and a window that seems to be closing very quickly, I think I speak for everyone when I see we would like some instant gratification and a player that we can throw right into the mix. Anyways, here’s to hoping for the best and preparing for yet another heartbreak in April/May…..fuck.

PS. NYR visit the Vegas Golden Knights January 7th, you better believe I’ll be in attendance for that one. Wait on it.