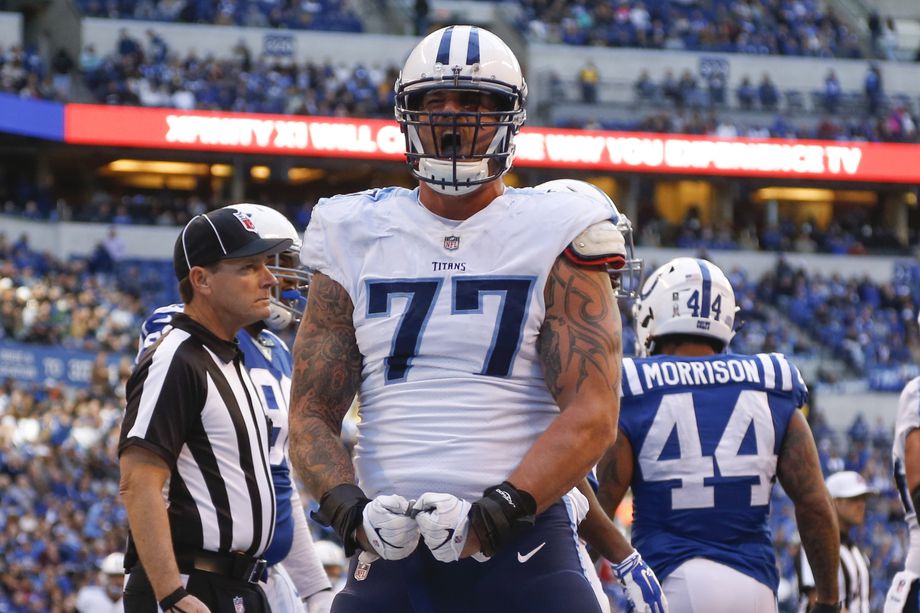 What should be an article detailing the second day of the New York Giants training camp will now be a league-wide noteworthy news article. Due to inclement weather, the Giants had to relocate practice to their indoor facility thus making it closed to the public. For those of you who are here solely for Giants news don’t worry I will be back covering the team next Thursday and Friday.

This news doesn’t come as much of a surprise judging that Taylor Lewan wound up reporting to training camp this week, which was indicative that the two sides were very close to a deal. Since coming into the league in 2014 Lewan has progressed into one of the premier offensive linemen in the game.

Due to Lewan’s yearly progression, the Titans extended him the richest OL contract in NFL history. The contract keeps Lewan in Tennesse for another five years and pays him 80 million dollars. While some of the details are still murky something of note is that the contract carries 50 million dollars in guarantees. The word choice is something to notice as this doesn’t signify that there is a 50 million dollar guarantee associated with the contract, but instead, there are incentives that teams throw in these contracts that will almost certainly pay him the 50 million. This tactic will help the Titans free up some cap space since incentives and base salaries are paid off differently.

Although Taylor got his massive payday no one should be happier than Marcus Mariota knowing that he has his star left tackle protecting him for the foreseeable future. In the entire 2017 season, Lewan only allowed 4 sacks, a year in which he faced a Khalil Mack, Jaguars defensive line, Joey Bosa, Von Miller, and Justin Houston. After reading those names it further justifies why the Titans gave Lewan the richest contract for an offensive lineman in NFL history.

The Falcons fan who removed Jones as his screensaver should quickly change it back to feature the Falcons star receiver as he will be reporting to training camp. Julio, who has strongly stated all offseason that he would like a salary adjustment to his contract is now set to earn an extra 2.9 million dollars this year. Instead of the 10.5 that he was originally scheduled to earn his earnings jump up to 13.4 million this season.

The Falcons were able to do this while virtually unaffecting their future capacity of extending contracts to their upcoming free agents. The Falcons were able to get Julio to lower his base salary down to 9 million but gave him a 4.4 signing bonus that they can pay out over three years. Julio gets his money, the Falcons get their player, and both sides are happy. I will have more on the Falcons next week as a receiving core of Jones, Ridley, and Sanu should make waves in camp now that they are all together. 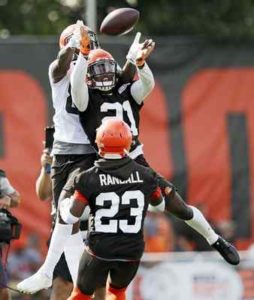 The Cleveland Browns caused a lot of heads to turn when they drafted cornerback Denzel Ward with their fourth overall pick in the 2018 draft. A lot of people would have gone with a corner such as Minka Fitzpatrick who was available or with pass rusher Bradley Chubb who went a pick later to the Broncos. The Browns seemed set to take Ward however and so far it has paid off. Ward made waves in his first training camp practice, a lot of the articles and note that I have scoured through have detailed Ward having a near perfect practice.

In 11 on 11 drills, Ward was able to pick off a ball intended for newly acquired Jarvis Landry, the biggest takeaway was his comfort in playing man coverage. With having a starting position already locked down Ward has already drawn praise from fellow Browns players for his willingness to learn and get better. There have been reports detailing the rookie watching a lot of tape and putting in extra work to get better each day. Having a strong first day of practice is not indicative of the type of player that he will be, but this kind of news should put Browns fans at ease over their draft decision.

Andrew Luck is Back

Andrew Luck is finally back after having missed the entire 2017 season, there were times last season where there was a serious doubt that he would ever play again but he is fully practicing. From what I understand the Colts are trying to work him back into football shape and have not really limited his workload currently in camp, on his second day of practice he apparently was able to hit some tight deep throws and was able to improve from his first practice where he looked rusty.

While Luck being back is great news for the Colts who were able to have a very impressive draft, the team should not forget about their other QB Jacoby Brissett. Jacoby is a player that teams around the league still see as a starter somewhere and a player who showed that he could excel in this league at times.

Something to watch for going forward is how both quarterbacks look in Frank Reich’s new offense that emphasizes quick passes. Luck has always been a very good quarterback but he does sometimes hold on to the ball too long resulting in a lot of sacks. Jacoby on the other hand sometimes tries to improvise and scrambles a bit, it should be interesting to see what Reich does with both after having come over from Philadelphia.

The Los Angeles Chargers worst fears were confirmed on Friday after cornerback Jason Verett went down during a conditioning test early in practice. The corner who this offseason was being heavily lauded by his coaches as looking incredibly healthy and very sharp. With Verett the Chargers were in contention for having one of the best cornerback groups in the league , one that should benefit from a vaunted defensive front harassing quarterbacks. Now that Verett has gone down I’m going to assume that the Chargers will deploy a cornerback group feature their star Casey Hayward, Trevor Williams , and Desmond King who was solid a year ago as the teams Nickel corner.

The defense should still be incredibly good , they have the personnel to mask Verett’s absence but should the secondary struggle this could spell disaster for the Chargers.