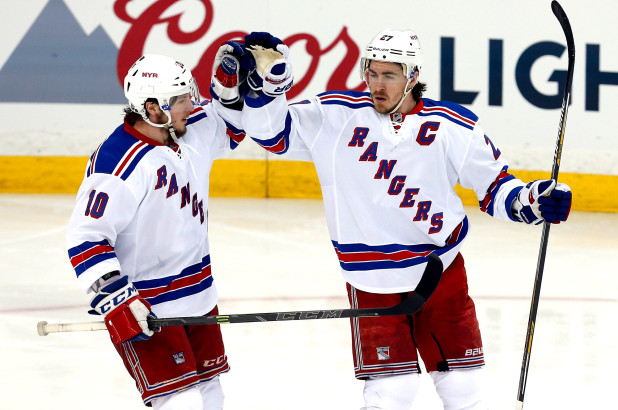 The Rangers did what many were expecting and then some with trading Captain Ryan McDonagh along with JT Miller. News of the trade came through the pipeline around 10 minutes after the deadline and little details were immediately known, of course. Now that the smoke and chaos has cleared from the 3 pm deadline we know who got what. Tampa gets McDonagh and JT Miller while the rangers receive Vladislav Namestnikov, Libor Hajek, Brett Holden and a 2018 1st round pick.

Namestnikov is the only real notable name here because he is the only one with real NHL experience, this being his fourth semi-full season and his best stats wise. Although, don’t be too sold on the stats as it can’t be terribly hard to pull those numbers when you’re playing with Steven Stamkos and Ryan Callahan. Still the potential is there along with young defenseman Libor Hajek (Czech) who currently plays for the Western Hockey League as does Brett Holden. 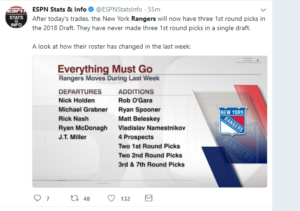 We know draft picks are not nearly as important as those in NFL or even NBA but hey, they can get lucky. 7 picks in the top 3 rounds is not bad. If we want to do the same song and dance we’ve been doing for the last eight years you can say this trade stinks! Let me say this: we’re rebuilding. Yeah we probably could’ve (should’ve) gotten more value for those two but in the end you want young players and draft picks. It probably wont be pretty, and it most certainly is not immediately gratifying, but in the long run this should be beneficial.

We haven’t even talked about the Nash trade either! Spooner, Belesky and my personal favorite Ryan Lindgren. Spooner will be a slightly less skilled Zuccarello who can make plays and create opportunities. Belesky, if brought up from AHL will be a gritty fourth liner who will be a little overpaid (1.9 million) but if he stays in AHL, the cap hit will be at 875K which i will gladly take for Belesky. Lindgren is not NHL ready yet but he is exactly what they need on defense. The gophers captain (voted captain as a sophomore) is not flashy, not a great offensive defenseman and will not rush the puck up and down the ice. He WILL be aggressive and sacrifice his body to make a hit. Hopefully they don’t bring him up too soon and let him develop naturally. Keep an eye on Lindgren, he is exactly what this defense is missing. Interesting to see how this season plays out along with the draft.