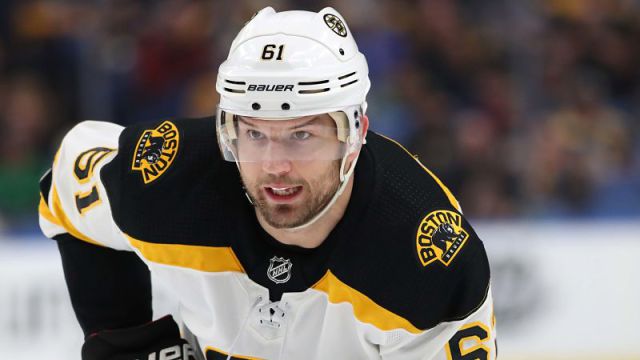 The Bruins made a major move over the past weekend that got them former 1st overall pick, Rick Nash. Nash is a six-time all star veteran who will surely add to the already hot Bruins team. The Bruins are currently sitting in third place in the Eastern Conference, trailing Tampa Bay by just five points.

The former Columbus Blue Jacket and New York Rangers winger has been playing at a highly competitive level since he first came into the league back in 2002. With 799 career points(434 goals and 365 assists), he will surely give this already prolific offense in Boston a boost that could take them to the next level. With all of the B’s young talent, Nash will likely be a second line wing playing along side David Krejci and Jake DeBrusk.

Nash and Krejci, both seasons vets, could form be a deadly combo if they find chemistry alongside one another. They should add some fire to the B’s second unit who has not quite lived up to expectations this season to say the least. The Bruins are being carried by their high-powered first line of Pastrnak, Bergeron, and Marchand, but could surely use some help.

Along with offensive skill, Nash adds experience in the playoffs having played in 36 NHL playoff games including a Stanley Cup with the Rangers in the 2013-2014 season. The B’s are poised to make a deep playoff run this year and adding a veteran talent like Nash definitely helps the chances of bringing Lord Stanley’s Cup back to the bean for the first time since 2011.

This team is starting to look scary good when they are on top of their game. Making a run for the cup is all getting hot at the right time and the B’s are gaining steam everyday.

I’ve had a pretty solid hatred for Rick for a while now because he’s that damn good. He torched my team enough times that i actually hated him. But I’d be lying if I wasn’t excited as hell to have him aboard. Let’s take a moment to remember just how good he is and relive some of his best plays.

I always say the same thing about great players who beat down on my teams, “I hate him, but goddamn he would look good in our jersey.” I can tell you that I feel the same way now as I did about Kyrie coming to Boston and goddamn is Nash going to look good in the ol’ black and gold.