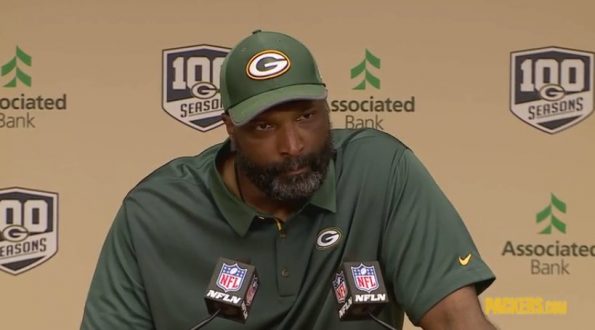 I did my best. I do not understand it. Why you would want to act that way is beyond me. What's odd about Winston Moss is that he's given us insight and elucidation at times. He's a smart guy. This is a conscious choice by him to be uncooperative. I don't get it. https://t.co/YGsirJCsna

This is an embarrassment. While it sounds like Winston Moss hasn’t always been this way, it’s happened often recently and it’s entirely unacceptable. Of course, you are going to get knee-jerk Popovich and Belichick comparisons. Those are mostly true, but the backlash should be less for them since they are both two of the greatest coaches of all time in their respective sports. Winston Moss regardless of his knowledge or respect within the NFL is a nobody in comparison. Granted this is terrible behavior no matter who it’s coming from, but when you accomplish a lot of stuff, you get some leeway.

Overall though, fuck Winston Moss along with any coach, player or GM who reacts this way to completely legitimate, non-provoking questions. Questions he’s required by league rules to answer. It’s literally his job. I get that some people have bad days every now and then and I get talking to the media isn’t your favorite thing sometimes, but you have to take a step back and look at it from a big picture perspective.

There’s gonna be some cold hard truth in this breakdown for all these people who don’t have time for reporters. The NFL is a business, as is every team. The owners write the checks. The owners wouldn’t have the money to write the checks without any fans (customers). If your business doesn’t have any customers then it’s quite literally worthless since it doesn’t have any source of income. This isn’t even business knowledge, this is common sense, as basic as it gets.

Now, where do reporters come into this? Reporters are basically like free business promotion. Without reporters and the information and content they provide, fans wouldn’t be nearly as knowledgeable, curious or invested in the sport and its teams. Reporters, especially today, keep the conversations and hype around the league and teams going. They cover it on social, on their websites, newspapers, and magazines. They provide exposure to the game on every medium possible. You think the NFL doesn’t know this? You think this isn’t a quantifiable value to the NFL’s bottom line? Of course it is, or else they wouldn’t make it mandatory for players and coaches to speak to the media.

All these players and coaches who treat reporters this way completely forget to realize that. They lose sight of the fact that without the fans (customers) and the media to help find and keep those customers, their jobs are meaningless. They wouldn’t exist. The owners wouldn’t have money to pay them. It’s harsh to hear, but it’s the flat out truth and the concept is as simple as it gets. Which is what makes my original statement true. This is embarrassing.

Take a step back and realize what each link in the chain does. It’s an ecosystem that relies on everyone doing their part. Reporters are just trying to do their jobs, the same as you are. Keeping this whole fantastic merry go round of professional sports going. By reacting to the media this way you are only hurting yourself at the end of the day. Shining the light on how worthless the business you work for would be if it wasn’t for the media and the fans.

It makes you look stupid because it is stupid. Stop being stupid, Winston Moss. If you must be stupid though, you better win five god damn championships first.