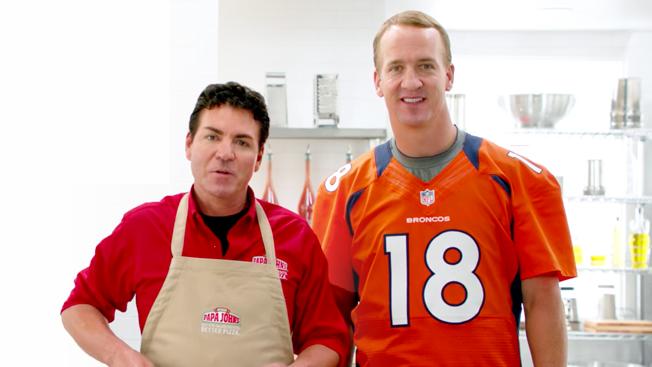 The NFL and Papa John’s ended their deal Feb. 27, and the league announced a multiyear marketing deal with Pizza Hut the following day. The NFL’s relationship with Papa John’s was strained last year when company founder John Schnatter criticized the league’s leadership over players who protested during the playing of the national anthem. – Chicago Tribune

Peyton Manning, you sly ass Martha Stewart mother fucker. Somehow this has flown pretty under the radar, but what a backdoor deal Peyton and the Papa pulled off here. Peyton Manning has become almost more of a face for Papa Johns pizza than Papa John himself has. He is that company and the NFL was that companies ticket to existence. Papa Johns is in a clear third place behind Pizza Hut and Dominos. Don’t @ me all you southerners who love Papa John’s. I know you’re already telling me to fuck off in your head.

I will admit I’m not totally sure on the legality behind this since Peyton technically sold franchises and not actual shares of stock. But god damn 31 franchises all in one day? Just randomly happens two days before they lose the only partnership keeping them in business?

Peyton definitely got a late night call from Papa on the pepperoni phone like “Hey Peyton, things aren’t looking too hot, since we’re best friends and all you should probably get rid of all these stores you own that make my subpar pizza. I got just the poor sap in mind to buy up everything you got.”

This guy probably got the call thinking it was the opportunity of a lifetime. Just happy to get a call from Peyton Manning. Peyton probably cut him a nice deal, knowing full well they weren’t going to be worth half that in two days. Little insider info giving his fellow franchisee a good old dicking. Peyton always got praise for being a standup guy in his football career. In retirement though, he’s one shrewd mother fucker.