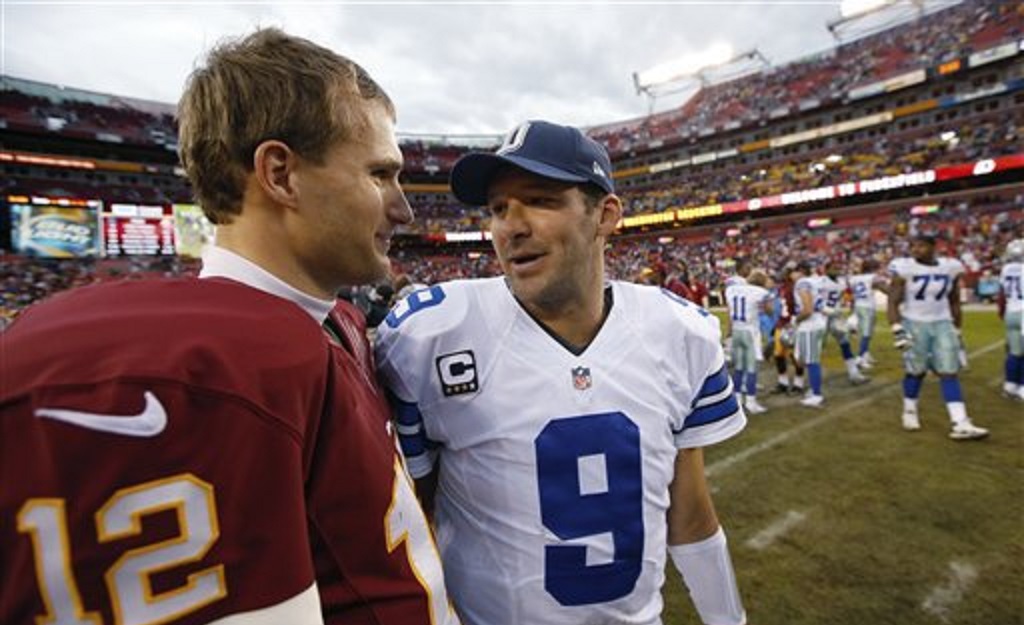 In what already seems to be a hectic day in the first day of NFL Free Agency, it’s only going to pick up steam. Kirk Cousins has reportedly asked Washington owner Dan Synder for a trade, Jay Culter has been released from the Bears, while they’ve signed Mike Glennon to a three year 45 million dollar deal. Out of nowhere, the Cleveland Browns have just traded for Houston quarterback Brock Osweiler. Yup, that means with Brock’s contract cleared, Romo will be traded to the Houston Texans. Oh, and also Colin Kaepernick is twiddling his thumbs waiting for all the dust to settle.

First, we have Kirk Cousins asking for his trade from Washington. I think I speak for everyone who isn’t a Redskin fan when I say thank god. Washington is such a fucking mess. Right when you think they have something good going they manage to fuck it up. Pierre Garcon is gone to the Niners, although highly overpaid at 16mil in his first year. DeSean Jackson has signed with the Tampa Bay Buccaneers, which I called two days ago, just a perfect fit for the Bucs. Aside from that, Washington has no defense and refuses to lock up the Michigan State quarterback long term. I’m sure we all had a feeling Kirk wanted out of Washington. The Jackson loss may have been the straw that broke the camels back.

But where will he be traded, if at all? It’s a tough one to call because we don’t know if he’ll even get his wish. Synder is just a terrible owner, there’s really no telling. I would’ve said San Fran would be the perfect fit and fresh start, especially with his old teammate Pierre Garcon signing there. However, the Niners just signed Brian Hoyer to a 2 years/12 million deal with upside, of 18 million total. I think this means Kirk could end up in LA believe it or not. Yes, this hurts Jared Goff’s value but let’s get one thing straight, he isn’t good. Also with Fisher gone, I can see this happening. LA wants someone who they can market and bring excitement. Who better than Kirk, he brings youth, energy, and passion. Not sure if he’ll get his wish but if he does, LA is a nice sleeper.

With the Bears signing Mike Glennon it only makes sense that the Bears released Cutler. Really thought Glennon would end up in New York before this shitstorm of releases happened, so I can’t blame him. Unfortunately, I think it means that the Jets will sign Jay Cutler (Stephen A voice). I guess it could be worse for the Jets. Cutler is far from a stud, but hey he’s always what is easily considered top five arm talent, he’s just never able to piece it together. His decision making and ability to lead have always been huge question marks throughout his career, though. The Jets are rebuilding and Cutler said he’d rather retire than play for a non-contender, but I’m calling his bluff. Cutler will likely sign a two-year deal and I guess us Jets fans will take it, but we’re far from thrilled.

Now let’s take a look at this whole Cleveland-Houston trade and it’s implications. The trade sends Brock, a 2018 second rounder and rights to swap conditional fourth and sixth rounder while Houston gets just a fourth rounder. Wow, holy shit. Who would’ve fucking guessed Cleveland of all places would be the team to stir the pot and dictate where Romo lands. Cleveland, was well below the required salary cap floor, so for that reason as well as taking a gamble on Brock, they made the deal. Even though they may just cut Brock and take the draft picks, not a bad move. What a power move, what a day.

Now for Houston, it’s pretty obvious they finally rid themselves of Brock’s god awful contract and now can trade for…you guessed it TONY ROMO. Romo will now inevitably be traded to the Houston Texans as the move clears up 16 million in cap space for them, bringing them to 40 million total. Romo’s cap hit will cost them 19.5 million, so they’re essentially trading Brock for Romo and whatever they give up to get him. Love the move for Houston. Big picture, this move really changes the NFL landscape. The missing piece for Houston was quarterback, as long as they do complete the trade for Romo, the Texans can go toe to toe with The New England Patriots.

Lastly, for Colin Kaepernick what does this all mean? Honestly, whoever doesn’t end up with a decent quarterback will probably be his destination. If Cleveland ends up waiving Brock, he could easily go there if there are no suitors. Finding love in a hopeless place maybe? Whoever takes Kap knows he brings baggage and could easily be a distraction, but neither may have a choice. Two other options could be the New York Jets or the Denver Broncos. If the Jets don’t sign Cutler they will either resign Geno Smith or take a look at Kap. But that’s still not very likely. As for Denver, they kinda get screwed in this Cleveland-Houston trade. They may just stick with Trevor Siemian. Call it a hunch but I don’t really see John Elway and Colin Kaepernick meeting in the same room.

So what does all this mean? In this absolutely crazy and fantastic day in NFL free agency, we are a little bit closer to seeing how the 2017 season should shake out. The biggest question mark which is almost nearly answered is Tony Romo. Romo will more than likely be wearing the Texans uniform and look to bring them to the next level in the AFC. We also, know Glennon will be the starter for the Chicago Bears and most likely Brian Hoyer for the 49ers. Jay Cutler, Kirk Cousins, and Colin Kaepernick are still all up for debate with potential suitors in the Jets, Broncos, and Rams. We’re a little closer but this is far from over. Get your popcorn ready and stay tuned, this shits just getting started and I can’t wait.