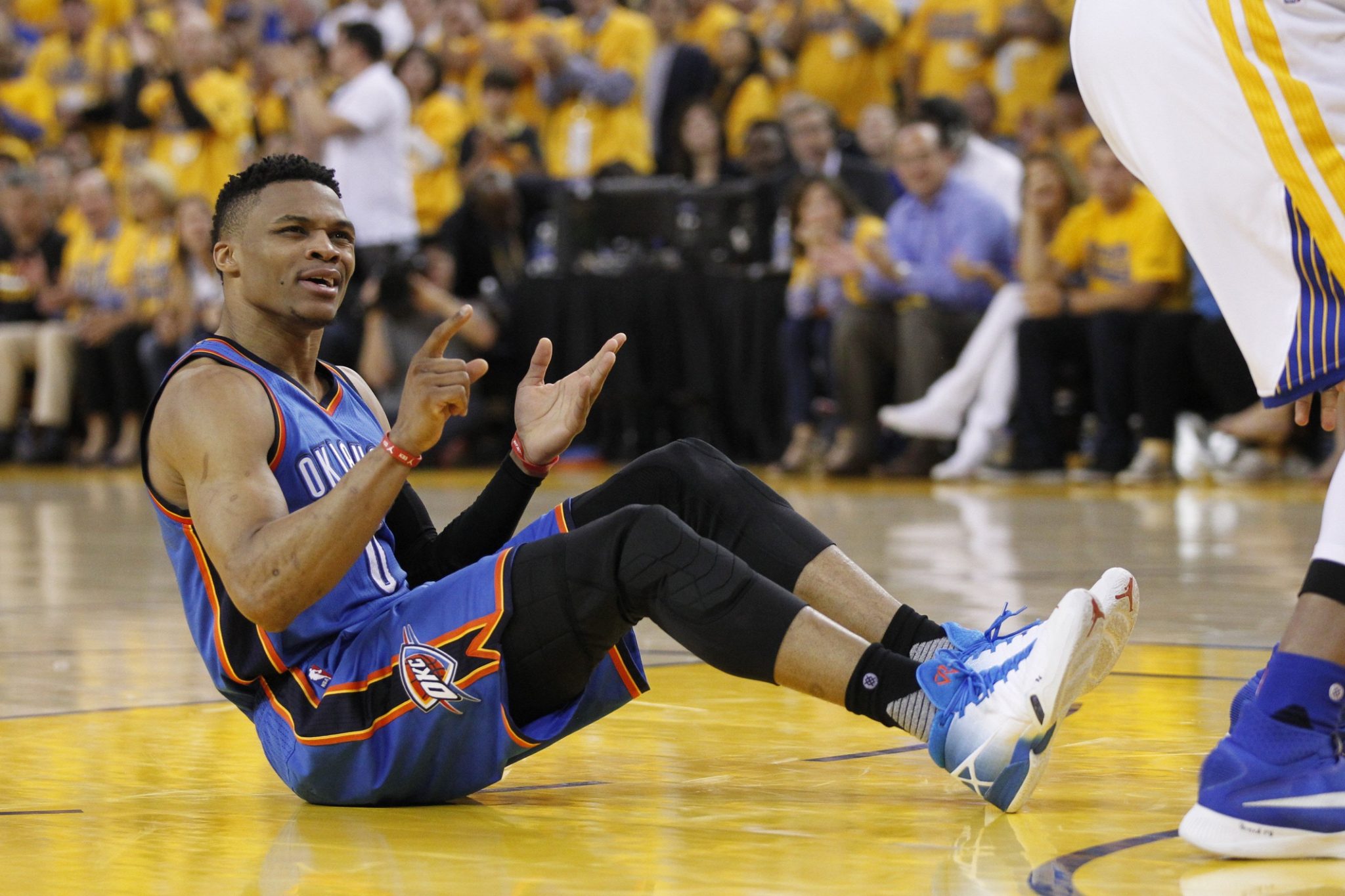 Russell Westbrook left the arena tonight before the locker room opened without speaking with the media.

Mr. Overrated himself. Russell Westbrook has shown time and time again, an almost countless number of times that he possesses the emotional fortitude of a teenage girl. Some call it passion. I call it pathetic. Some call it competitiveness, I call it pettiness. Some have even called his attitude legendary, that assessment can be described the same way as Russell Westbrooks attitude, embarrassing. Russ cares about himself and his stats, not winning. Sure he loves to win, but is it most important to him at the end of the day? Absolutely not and you’d have to be through the roof naive to think anything else.

It’s ok Russ, you may be fooling millions of people, but you’re not fooling me. Why do you think Durant walked out on you? It’s no secret. Why do you think Paul George and Carmelo Anthony are going to do the same the first chance they get at seasons end? Carmelo Anthony could be potentially sacrificing tens of millions of dollars, literally so he doesn’t have to play on the same team as you anymore.

Russell cares about being the man and the only man. He can state the contrary all he wants. His actions are enough to paint an entirely different picture. Someone’s words mean nothing when their actions contradict those words. His actions spoke loud and clear Tuesday night. Russell “Stat-Padder” Westbrook missed a triple-double by 1 rebound. The Thunder did not play well, when that happens, the leader of a team should be the first one to answer questions about the team’s poor performance. The only problem is, Russell Westbrook isn’t a leader. He’s an athletic freak and an incredible basketball talent and no one can deny that or take that away from him, but a leader? No shot. This is just another prime example.

Do we officially know why Westbrook elected to skip speaking to the media? No, we don’t. Do we have a pretty damn good idea based on situational and historical evidence? That we do.

The fact remains, without some extenuating circumstances surrounding a family issue, an emergency or something along those lines, there isn’t an acceptable excuse to skip talking to the media. If it is indeed because his team lost and he missed his triple-double then it will only further confirm the already cemented truth, Russell Westbrook has a lot of growing up to do before his attitude can be considered one of a man, let alone, THE man.

Rise + shine + vote for Russell Westbrook
RT this to #NBAVote today for Russ to start the 2018 All-Star Game. pic.twitter.com/DWykUnvj4o

P.S. If that’s what an All-Star attitude looks like then I’m all set.