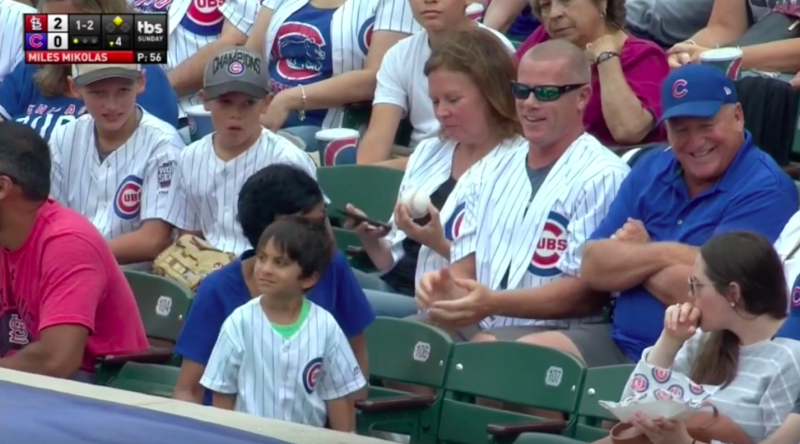 Everybody has seen this video in the last day. This out of context 5-second clip of this seemingly asshole guy, taking a foul ball clearly intended for a little kid. If you haven’t seen it, come back out from under your rock and check it out below.

When going to a baseball game, DON'T be this guy. pic.twitter.com/pAeiRN6Q2X

Not the type of move you’re gonna be proud of. In fact, based on that video that’s probably the worst thing you can do at a baseball game, other than having your bachelorette party there, obviously. But alas, that is not the whole story!

I spoke with people from the Cubs. The man who grabbed the ball on the widely seen video had actually already helped the little boy get a ball earlier. The young man has a game used ball and a Javy Baez ball. All is well. Guy is A-OK so let it go people.

Alrightttt, now we have some context. This guy is god damn Captain America Peter Pan in one. It also should be noted, the guy didn’t take the ball for himself, even in the short video clip. He gave it to his girl. Listen it’s all peaches and cream to say you should give the kid the ball, but I’m not looking at it that way because I know how to look at things one way and one way only. Entirely through logic. This kid is young and clearly has the parents or guardians that can afford front row seats. He’s got his whole life to get another foul ball, which is way easier with marginal effort than finding the girl of your dreams. Numbers don’t lie, I’ve seen those divorce rates. Just cause you’re married doesn’t mean you found her. Who knows what this guys deal is. Maybe that’s his wife, maybe it’s his first date and he’s trying to make a good first impression. Either way, the guy didn’t do anything wrong.

The kid though, what the hell does he think this is? A fucking magical fairy world where you get every foul ball that ends up on the first base side? He ALREADY had a ball that the same guy gave him! You got your ball kid, that’s it. This isn’t a free for all, this is the real world. OF COURSE, everyone freaks out on the guy and pity’s this kid while knowing literally 0% of the truth. Kid ends up with a signed baseball and he STILL wanted another ball. Talk about a participation trophy generation. This kid contributed not a single bit of work, effort or knowledge in the situation and is trying to walk away with two game balls and an autographed ball like its no big thing. As if it’s just automatically supposed to go to him. Fuck outta here. Not only did this great man give him the joy of a foul ball earlier in the game, he provided him with a great life lesson the second time around. The kid is winning at every turn and people hate on the adult who provided it all for him.

You all can sit here and be fooled and refuse facts. I’ll follow the truth, not “Your truth”. That’s the new one these days, “Your truth” like there fucking multiple versions and definitions of the truth now. No, there’s just THE truth. That’s it. This kid is the same as that stupid kid Knicks fan who cried when Porzingis got drafted. Now ESPN parades him out here every year like he’s any representation of Knicks fans. Meanwhile, he’s the most hated person in all of the Knicks universe aside from James Dolan himself. I hate that kid, I hate this kid and I hate everyone hating on one of the most generous guys America’s pastime has ever seen.

P.S. If he didn’t get laid after going through all this then he should trade with the little kid, his girl for one of those foul balls. Even Steven.

Who Is The NBA Rookie Of The Year, Simmons or Mitchell?
Khabib vs. McGregor Set To Be The Biggest Fight In UFC History
To Top