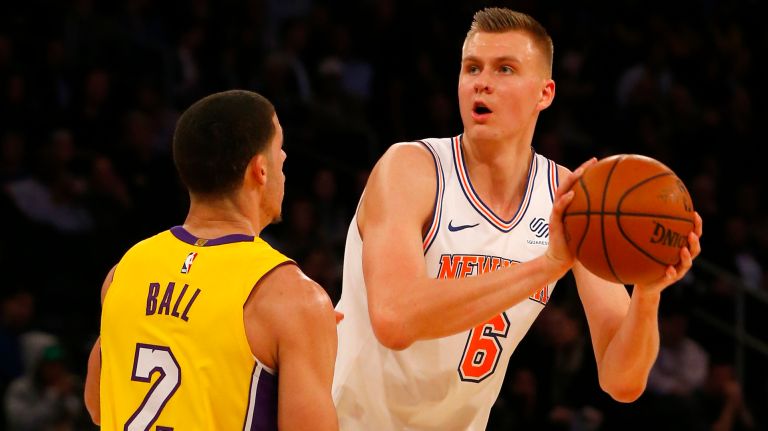 Knicks-Lakers better than any NFL game this year.

The 🦄 will be having none of that! ❌ pic.twitter.com/vXjQ2BpuT1

The @Lakers and @nyknicks go back and forth for eight consecutive made shots!

Kristaps Porzingis posted a huge stat line of 37 PTS, 11 REB, 5 BLK to lead the @nyknicks over the @Lakers in overtime at MSG! pic.twitter.com/nYdaCwmcEl

What freaking game. On the national game of the week, with the two biggest markets showing off their young up and coming teams, the Knicks and Lakers did not disappoint. From start to finish this game had everything. From a fast paced (most combined FG attempts in the NBA so far this year) to big names, A-list celebrities, long three’s, alley-oops, put back dunks and exciting blocks. Even the entire Ball family, one playing and the other three sitting courtside next to Odell Beckham, Magic Johnson and of course, Spike Lee.

This game never gave you a chance to take your eyes off of it. It was must-watch TV for 48 straight minutes. Lonzo showed up and had a great game on the biggest stage in the NBA. Porzingis finished with 37 pts, 11 rebounds and 5 blocks, one of the most well-rounded games of his career. Even the Knicks rookie Frankie Smokes came out of his offensive shell and had a great game.

This all speaks to the larger point, which I’ve been saying for a while, but the NBA is someday going to overtake the NFL in popularity in this country and the date of that happening is approaching faster than most people think. Robin Lundburg seems to agree with me because this was indeed a better more existing game than any NFL game so far this season.

With the NFL losing popularity by the day and it’s weakening stance on the game’s violence, they’re opening up the door for another league to slide in and overtake them, which the NBA fully plans on doing. It’s faster paced seems more impressive athletically, and the fans are much closer to the action. In terms of how the leagues are run, the NBA does every single thing better than the NFL. They are better marketers, better at expanding their game to new people in this country and around the world. They’re better at connecting with fans in a multitude of ways and manage crisis immensely better. The NBA has much more recognizable superstars and makes them the centerpiece of their league, rather than the teams.

The NBA encourages their players to have a voice on social media and within social issues. It embraces its diversity and freedom of its players, the NFL simply doesn’t. The players reciprocate that in more ways than one. Not to mention, Adma Silver is arguably the greatest commissioner in American pro sports history, Roger Goodell, arguably the worst. If not the worst than most definitely the most hated.

With games like this being churned out by the NBA, the NFL doesn’t stand a chance. Slowly but surely, the NBA will win out. One unnecessary roughness penalty at a time.

Giancarlo Stanton Had Plenty of Subtle Jabs for the Marlins in His Introductory Yankee Presser
Watch This Atlanta Hawks Fan Hit a Very Unconventional Half Court Shot for $10,000
To Top