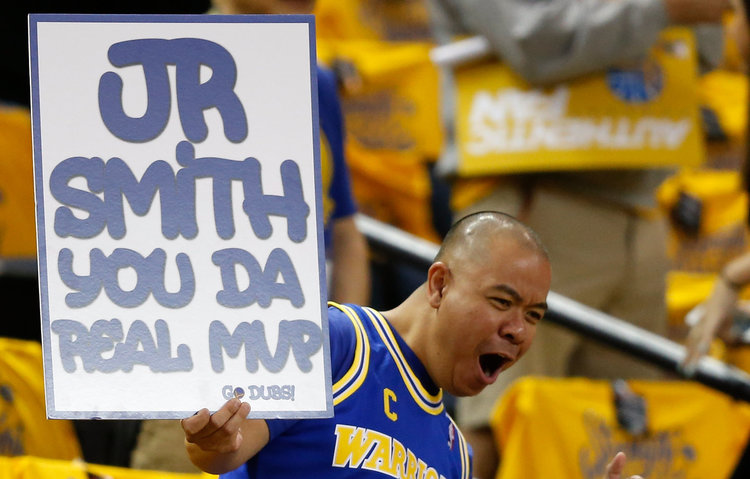 The Warriors and their fanbase aren’t what you would call the most well-liked people throughout NBA fans. What most people don’t realize or aren’t willing to admit is that they are actually pretty solid at trolling the opposition. They do it in all forms at a variety of levels. From the brash Draymond Green to the soft-spoken coach Steve Kerr. Each has their own style, but each is equally effective and hilarious. This all continued before, during and following game 2 of the NBA Finals Sunday.

It all started with Draymond Green, who was not too brash with words this time around but decided to let his outfit do the talking. Prior to game one (and game 2), LeBron James showed up in one of the more ridiculous outfits you can imagine. See below:

Social media obviously quickly reacted to this horrendous combination of materials covering LeBron’s body. After a full three days of jokes and memes, Draymond Green showed up for game 2 in a similar outfit, which most see as a subtle yet obvious trolling of LeBron’s game 1 ensemble. This is what Draymond had on:

Draymond Green showing the world that he, too, owns a shorts suit pic.twitter.com/G7ie9asu9q

Example two of the night was the Warriors crowd. Again following three days of humiliation online and over the airways of JR Smith and his mind-blowing, series-altering screwup at the end of game 1, the Warriors fans were there to troll in the perfect way. During the starting lineup announcements, Warriors fans booed every player, until JR Smith, who received a huge ovation. To pile it on even more, while JR was at the line the fans started MVP chants for him.

Last but not least, the silent assassin Steve Kerr decided to add insult to injury by trolling LeBron in his post-game presser. Following the frustrating loss in game 1, LeBron became annoyed with the questions he was being asked by reporters in his presser. After having heard enough, LeBron got up and walked out mid press conference and on his way out said to the reporters “Be better tomorrow”. So following Kerr’s press conference aft5er game 2 he decided to let the reporters know he was pleased with their performance today and in the process ROAST LeBron. Check out Kerr’s subtle yet not so subtle burial of King James:

Man, you might hate the Warriors, but you cannot deny their ability as an organization to put together some impressive trolling.