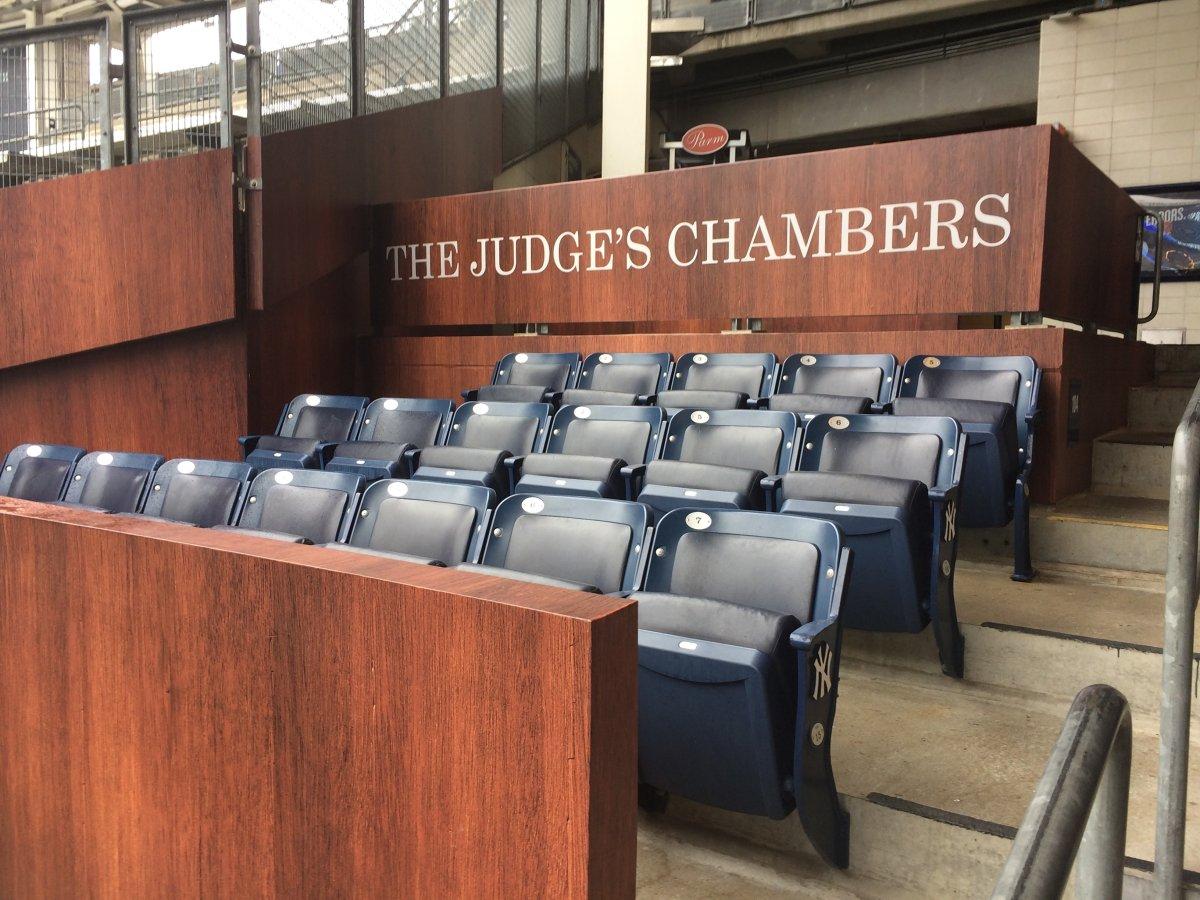 On Monday, the Yankees unveiled “The Judge’s Chambers,” a specific cheering section for their towering outfielder in the right field stands directly behind the real estate where Judge plays. The team added fake wood paneling around three rows of seats in section 105 in right field, and “The Judge’s Chambers” is written in capital letters along the back of the paneling. For a player who just graced the cover of Sports Illustrated, and who Yankee manager Joe Girardi earlier this season likened to retired Bombers captain Derek Jeter in the way Judge handles himself, the Chambers is the latest form of praise heaped on the 25-year-old Judge.

“It’s pretty unreal. I never would have thought so soon, but the fans like it. I’m glad they’re having fun,” said Judge after Monday’s 4-2 win over the Royals. “It’s pretty cool. When you come to a game, it’s supposed to be fun for the players and the fans. (The Yankees) just brought it up to me, and said, ‘This is what we’re going to do. Put out a section and call it “Judge’s Chambers” and get them little judge outfits.’ I think it turned out great.”

….Fans were randomly selected to sit in the Chambers before Monday’s game, and that trend will continue throughout the season, said Zillo. Select fans wearing Judge jerseys and gear were chosen Monday, but Zillo said the residents of the Chambers going forward will include Little League teams or kids and adults from local youth and community organizations. In a practice that will continue at all home games this season, fans sitting in the Chambers get to don black judge’s robes (sorry, they have to be returned) with Judge’s No. 99 on the back and the Yankee logo on the front, which they wear during the game. The same fans also receive a foam gavel (available to keep) with the words, “All Rise!” on them. – H/T (NY Daily News) 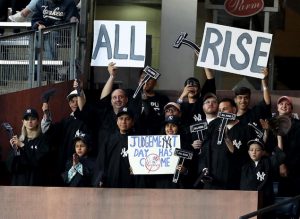 An interesting move here by the Yankees. When I first heard about this I have to admit I was torn on this one, for a few reasons. On the one hand, it’s a cool gesture to randomly select fans wearing Aaron Judge jersey’s or shirts to get an “upgraded experience” for one game. Little cool and unique extra things like that, that teams give to fans is always something I’ll admire and appreciate.

So in that sense, I’m all for it. But on the other hand, it just seemed so Un-Yankee like. The Yankees have always been about style and class and clean cut looks. I mean they don’t let people have hair that touches the back of their t-shirts, now they’re redoing sections of the stadium like a showroom at Sears. The Yankees were never about the gimmick, they never needed to be, they were above it. The gimmicks were left to the teams like the Diamondbacks, Marlins, and Rays.

It just doesn’t seem like a fit to me, it all seems so forced with the robes and gavels. It’s like a metaphorical version of the new ownership under the Steinbrenner sons. Being “The Boss” flowed naturally for George, it was in his DNA. He had the killer instinct because he built everything he had. His sons didn’t have those same challenges and it shows in the way they run the team. I’m not necessarily saying it’s bad, but it’s just not George.

Then again the Yankees haven’t had a young homegrown player this polarizing since Derek Jeter. And Judge is far from the only star in the making. Maybe it’s truly the changing of the guard across the board. The George era is over and the Hal and Hank Era has officially begun. If their run ends in a couple of dynasty’s then I suppose I could come around on the gimmick in right field. Best case scenario it becomes Bleacher Creatures “light”. Which would be fine here, since the Bleacher Creature mindset was some of the inspiration behind both the name and mantra of Bleacher Fan Sports.