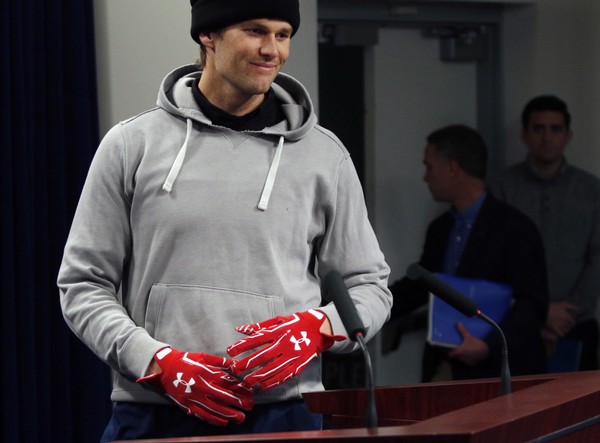 The big story heading into the AFC championship is Tom Brady’s hand injury. Let me tell you, there is no fucking hand injury.

If you think for one god damn second that the guy who bent the league over for the better part of the season and is most likely the league MVP is going to miss a conference championship game, then you probably have shit for brains.

This is a classic Belichick tactic. Come up with some BS story or injury to make Jacksonville think they have an upper hand.

We should all realize that come Sunday afternoon at 3:05, #12 will be standing under center picking apart the Jags defense. This is a man who has done what no other quarterback has done. He has remained an elite QB at the age of 40. Sure Farve played into his 40’s and wasn’t terrible, but he wasn’t half the QB Brady is at this age. He didn’t win a passing title and definitely wasn’t the favorite to win the MVP.

In his early afternoon press conference on Friday, he laughed off any questions about the hand injury and kept reiterating that he wasn’t going to talk about it. He even came to the podium wearing red Under Armor gloves that he was seen wearing at practice. When asked Tom said “it had been a long time,” since he has thrown wearing gloves.

I know I said I was terrified of facing the Jags defense, and I still am. But one thing I’m not worried about is TB12 playing this weekend. Do you really think he’s going to sit on the sidelines and let Brian Hoyer start the AFC championship game? GIVE ME A BREAK.

This is the most competitive man to ever put on a helmet and shoulder pads. Name me one other person who has been down 25 points with 16:12 left to play and played with the purpose and ferocity that this man did…I’ll wait. Oh that’s right, you can’t.

He has staged the two biggest comebacks in Super Bowl history. This is a man never learned how to quit. He went 199 overall in the draft. There were 6 QB’s taken before him that year. He’s not only the most successful from his draft class, he’s the most successful of all time and still looking to add to his resume.

The blitz for number 6 is real and I will bet my life that when gametime rolls around Sunday afternoon, we will be looking at that 40 year old GOAT calling plays for the Pats.