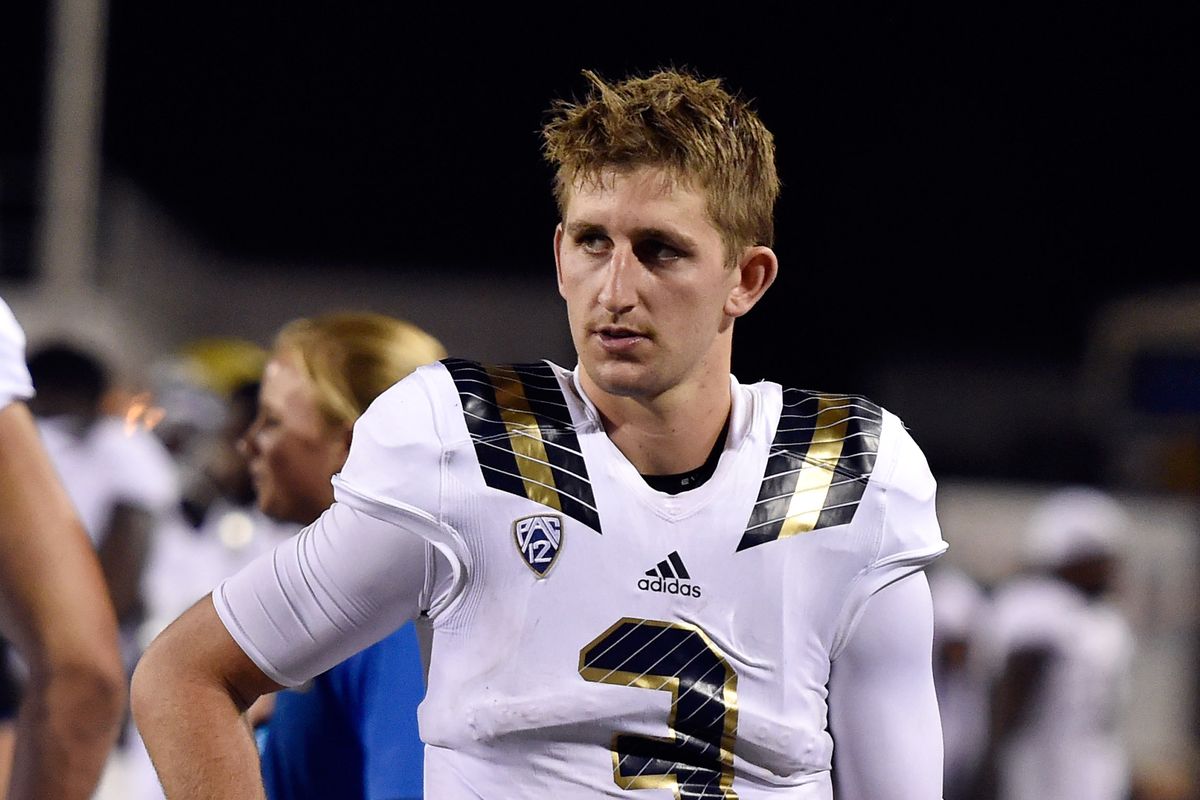 UCLA quarterback Josh Rosen’s comments about the challenges of mixing academics and football were heard all over the college football world on Tuesday.”Look, football and school don’t go together. They just don’t. Trying to do both is like trying to do two full-time jobs,” Rosen said in an interview with Bleacher Report. Former Ohio State quarterback Cardale Jones once made a similar statement during his freshman year in 2012, when he was still a third-string quarterback.

Jones has since graduated and plays for the Los Angeles Chargers, and his views about academics and football have changed quite a bit. It’s not the first time that Jones has referenced the infamous 2012 tweet. During graduation weekend, Jones shared the screenshot of the deleted tweet and even decorated his cap with the quote from his freshman year. Rosen referenced Alabama in the interview before clarifying his comments. “Raise the SAT requirement at Alabama and see what kind of team they have,” he said. “It’s not that they shouldn’t be in school,” Rosen clarified. “Human beings don’t belong in school with our schedules. No one in their right mind should have a football player’s schedule and go to school. It’s not that some players shouldn’t be in school; it’s just that universities should help them more — instead of just finding ways to keep them eligible.” H/T ESPN

First off, my man Josh Rosen, telling it how it is. I’ll always appreciate an athlete doing that, especially a college athlete and one with this much to lose. People want honesty out of their athletes but then are the first to criticize when they actually get it. Except Rosen isn’t telling us anything new. He’s not breaking news here. It’s just something people will always conveniently turn a blind eye to as long as it benefits them. Which is fair to say is the entire mantra of the NCAA.

What Rosen said wasn’t his opinion. It wasn’t a part of some grander discussion. It wasn’t something that’s up for debate. Every word Rosen muttered was a statement of fact. Same as the sky is blue and 2+2 always equals 4. Of course football and school don’t go together. School for top tier division one athletes is a cover up. It’s…

That sums of the educational aspect of a division one college football player’s career. You think Alabama doesn’t know this? You can insert any big name school and their team would be decimated with a minimum SAT score put in place. I’m talking unrecognizable. Saban knows this, everyone knows this. They have people that take the damn SAT’s for kids just to get them in. You think Primetime Neon Dion Sanders went to class at Florida State? The answer is no he did not. At all. It’s just not part of the fabric of the system. If the NCAA thought it mattered, they would act like it.

Cardale Jones though. Fly your flag my man. Wear your heart on your sleeve. None of this fickle garbage. I’ve said many times, I hate no one and nothing in life more than hypocrisy. Being fickle is a real close second. You can’t go from this:

Just because of this:

Everybody knows damn well you didn’t attend class. Nothing changed from the day you said that from today. The only difference is that in the meantime you got a piece of paper with some words printed on it. They aren’t a representation of any school work you completed. It’s a certificate for three years of service with the Ohio State University football program. Nothing less, nothing more.

I’m actually blocked by Cardale Jones on Twitter. Dates back to like three years ago right after he burst onto the scene. He tweeted out a picture of himself at a Vegas club next to bottles of liquor. He was 20. So I tweeted “#NCAAviolation.” Blocked instantly. Do I care at all that he was doing what he was doing? No, not in the least. Looking back am I happy I tweeted it? Couldn’t be happier.

I think college players should party it up and be able to make all the money they want and can for themselves. But now, after the fact, Cardale Jones wants to change his opinion on the matter? Now that he’s out of the control of the NCAA and has his Trump University diploma? It’s easy to want to “Play school” when you know you’ll no longer ever have to. Yeah, that’s called being a hypocritical fickle fuck. That’s not something I will ever be on the side of, no matter how positive the message is.