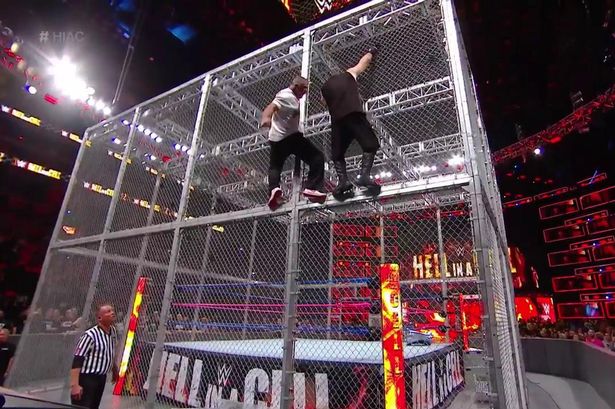 WWE Hell in a Cell was pretty much as expected with almost all the heels winning and not much excitement outside of the two HIAC matches.  The main event featured Shane McMahon taking on Kevin Owens and the two even battled on top of the cell! ]

The biggest (yet most expected moment) came when Shane decided to take to the top while Owens laid on the announce table to perform another leap of faith off the cell. As expected, the boss’s son launched off the 20-foot structure and Shane came crashing through the announce table causing him to lose this match.

The semi-unexpected moment (because Shane jumping off cells is old news) came when Sami Zayn appeared and was the reason Shane missed his leap.  Zayn came out to help his former/current best friend by pulling him off the announce table and then dragging Owens over McMahon to pick up the 3 count victory.  It looks like we’ll have a heel Zayn going forward and I’m excited.  Zayn’s ska music entrance and no substance is old and I think the duo with Owens has nothing but potential.

Look how close this was!

What did you think of the match?  Did it live up to the hype? Are you excited for a heel Sami Zayn?  For a weaker PPV, good job to WWE for building some intrigue to Smackdown Live this week.