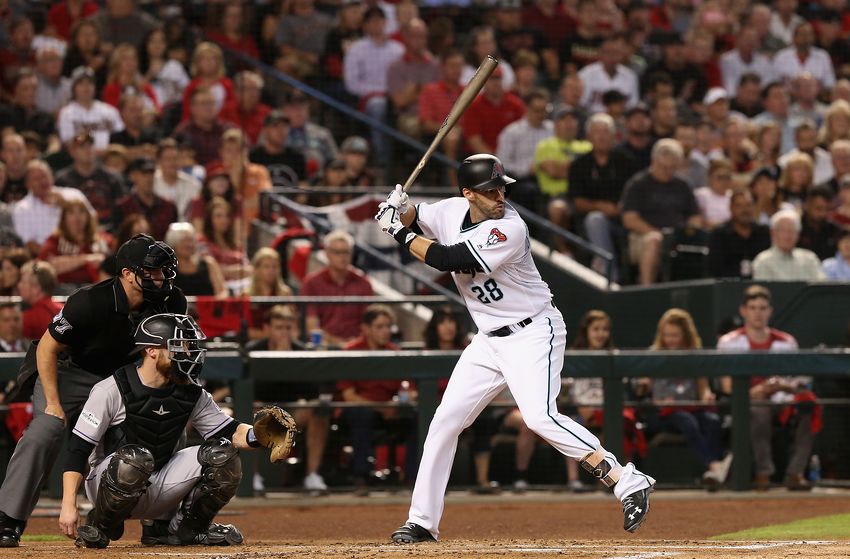 After weeks of back and forth between the Red Sox front office and J.D Martinez’s camp, they have finally reached a deal sending the Arizona slugger to Boston for 5 years and $110 million.

The deal which includes a player opt-out after year 2 will have an average payout of $22 million per year, but he is guaranteed $50 million in the first two years. He also has an opt-out after the 2020 season.

Let me start by saying this was a move that needed to be made. Once the AL East rival, Yankees, added Giancarlo Stanton to their already powerful offense led by Aaron Judge and Didi Gregorius who combined for 77 homers(52 of which were hit by the rookie, Judge) and 201 RBI’s, something needed to be done.

Since the Sox lost one of their best offensive players in franchise history to retirement at the end of the 2016 season, there has been an evident lack of offense in Boston. In 2017, the Sox were ranked 27th in homers with 168. Judge, Gregorius, Sanchez and Stanton combined for 169.

Let that sink in, four guys hit more home runs than the Red Sox entire team. If the Red Sox had any chance of competing with this unreal offense in New York, they needed to snag Martinez, who was really the only free agent option in the market that could help compete with the Bronx Bombers.

In 2017, J.D. hit .303 with 45 HR’s, 104 RBI’s, and 1.066 OPS, all career highs while playing in just 119 game. That home rate is so crazy that if carried out over the full season would be 61 homers, two more than Stanton’s season last year. Although he probably won’t keep up that historic home run rate playing full year in the dreadful AL East will only help him. Also, he will be playing mostly DH for Boston due to their already highly talented outfield of Jackie Bradley Jr., Andrew Benintendi, and Mookie Betts. He also has a great chance to add onto his RBI total if he stays healthy with a young and talented Sox lineup.

The most likely starting line up for the Sox on opening day will be:

Until today, I had very little hope for my team in the AL East. I was losing hope for the J.D. signing more and more everyday and I knew without him the Sox had no chance to win the division with the team they had brought together in New York.

The Yankees will most likely win between 96-100 games with their high powered offense and starting rotation centered around Severino, Tanaka, and Sabbathia, who they were able to bring back for a great value on a 1 year deal. If they can stay healthy and pitch up to their potential, we know the offense is going to produce and they will win a ton of games.

Last season the Sox finished 1st in the East with a 93-69 record, just two games ahead of the Yanks, who finished 91-71. My early prediction is New York will finish 1st with let’s say a 98-64 record and the sox, with the addition of Martinez, who boasts a 4.1 WAR, will finish around 97-65 and clinch one of the two AL wild card spots. I think it will be a highly competitive season that will really light the fire underneath this classic rivalry.

I’m glad the management was able to get this deal done because the Fenway faithful would have let them hear it if Martinez had slipped away. However, I am not so happy with the terms of this deal.

Having a player opt-out after year 2 with a guaranteed $50 million leaves a good chance he collects his paycheck and tests the free agent waters to chase the money in the $150-200 million range he was looking for this year, especially if he excels in Boston.

After the 2019 season he will be 32 years old and that leaves potential for him to land another big deal for 4-5 years that would lock him down for the later years of his career. He also has the option to opt-out after year 3, in 2020. By then he is guaranteed to make $72 million, which is a huge chunk of change, even for a major market team like Boston.

Luckily, that’s not something we will have to worry about for two seasons and hopefully in that time he can make a name and home for himself here in Beantown.

There will definitely be pressure from media and fans for him to perform due to the nature of his big ticket contract. He will be met with high expectations just like David Price upon his arrival in 2015. This is a little concerning to me because like Price, he comes from a small market team who has a history of losing. Now losing is something that we do not take lightly here in Boston, pressure and criticism can ruin guys if they let it get in their head.

As a whole, I am excited to have the opportunity to watch one of the best hitter’s in the game form last season suit up to play in front of the Fenway Faithful. So cheer’s to the newest member of the Sox, may you have a monster year and hit countless homers over your newest friend the Green Monster. Welcome to Boston, J.D.

The Danny Garcia Show?
Donovan Mitchell is Spinning a Spider Web of a Case for Rookie of the Year
To Top