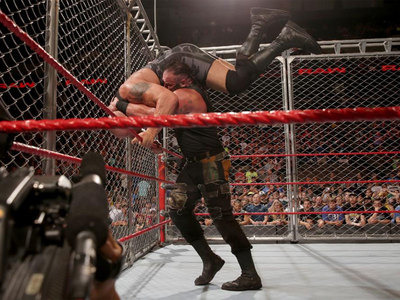 WWE RAW ended with a bang when Big Show challenged Braun Strowman in a steel cage match to close the show.  While this match had no reason being made other than showing what two giant athletes in a ring can do, they delivered with an exciting spectacle featuring a Big Show top rope elbow drop and most importantly, Strowman throwing Big Show through the steel cage after the match (full video below).

This was an incredible ending to the show which was shades of Big Show’s debut when he threw Stone Cold Steve Austin through a cage costing Vince McMahon his win against the Texas Rattlesnake.  This could signify the end of The World’s Largest Athlete and it would be poetic justice to go out the way he entered WWE.  I don’t know for sure that Big Show is finished, but he’s been pretty vocal about his time coming to a close.  Strowman picked up the victory heading into his match with Brock Lesnar for the WWE Universal Championship and with these insanely exciting spots each week, he deserves the title now more than ever.  It’s time for Strowman to signify himself as a main event star and Lesnar is just the guy to do the job.

For one last look at the insane spot from this week’s RAW, check the video below. Let us know if you think this is it for The Big Show and if it’s time for Strowman to capture the championship at No Mercy.