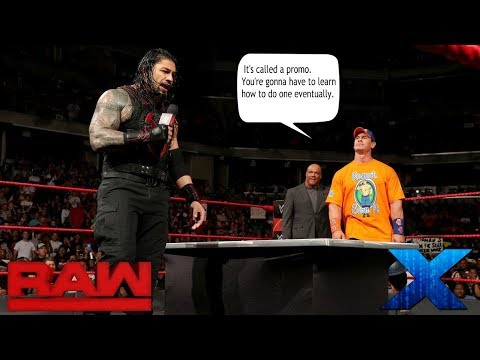 Since SummerSlam and ahead of WWE No Mercy, WWE has really picked up their programming lately.  Yes, there are still some severe droughts of excitement in these programs, however, no one can deny how amazing John Cena and Roman Reigns were on RAW.  Smackdown featured the return of Shelton Benjamin n tag team action and an exciting moment for the WWE Championship picture.  Are these steps a positive one for the WWE? Let’s find out.

I’m going to start at the top with the best thing of the week: John Cena and Roman Reigns.  This has to be the best contract signing of all time and saved their feud completely.  While I’ve been excited to see two polarizing figures that receive a mixed reaction from the crowd go toe to toe, announcing their match online without anything on TV seemed like a cop out.  A way for writers to just say, “Hey these guys are having a match without actually building a real reason.”

I’m happy to say Cena and Reigns took the ball and ran with it bringing in tons of real situations into Monday Night RAW.   Reigns brought up Cena’s part time status and claimed that he isn’t as good as he thinks.  Cena fired back bringing up that if Reigns was better, Cena could just retire but since he’s not he still has to be around.  He also mentioned how he’s accomplished more than Reigns as a part timer than Reigns could full time.  I also can’t leave out the truth about Cena winning the U.S. Title and making it mean something, while Reigns took it as a demotion (backstage perception) and making championship irrelevant.

Storylines are always better when WWE plays off of our perceptions and injects a bit of truth into the feud and this was no different.  I think Cena found the one opponent he’s unanimously going to be cheered in favor of and Reigns can play the heel in this role.  I’m not trying to discount Reigns here as even Cena alluded that he finally cut a good promo (even though it took him all these years) in their fourth-wall-breaking segment.  In the end, Reigns was still simply outmatched.  This version of John Cena is the best in the business today on the mic and I’m excited to see more of this version instead of the corny joke-making Cena.

To me, that segment was main event worthy, but instead, we are given another Sasha Banks title defense defeat.  Sasha has never defended her championship successfully on TV and at first, it would be that she would win the championship on RAW but lose it at the next PPV.  Here, she won the championship against Alexa Bliss at SummerSlam, but lost on RAW.  Why we are playing hot potato with certain Championships (RAW Women’s, Smackdown Tag Team and the U.S. Championship) is beyond me, but Sasha suffers yet another defeat and I don’t get what they do with her.

While the Women’s championship perplexes me, I’m excited about the Intercontinental title again.  Jeff Hardy won the #1 contender battle royal to challenge The Miz next week on RAW.  I really don’t get how Jason Jordan didn’t win (or never wins) now that he’s Kurt Angle’s son (it’s still damn true), but I’m excited to see the Hardy’s in a meaningful match that isn’t a throwaway tag match.  This can easily be a one-off and have Gallows and Anderson come down and screw him out of his chance, but maybe this can lead to something bigger.  The Hardys are still one of the most popular tag teams not only in history but on the roster.  There is much left to do with them.

All this talk about the show and I haven’t even gotten to Brock Lesnar.  Heyman came out to cut much of the same promo and Lesnar took the mic and only said, “Suplex City Bitch.”  That is all the Beast has ever uttered on live TV, but that’s all he needed to put an exclamation point on that segment.  I’m so excited for Braun Strowman to take on Lesnar at No Mercy for the title as they’ve built Strowman to be the only credible person to slay the Beast.  Between Cena/Reigns and Strowman/Lesnar, we have one hell of a card shaping up for No Mercy!

Lastly for RAW, poor Enzo Amore.  His backstage heat has finally caught up with him to the point that he’s been sent down to the Cruiserweight division.  I don’t see him ever capturing the title, but his merchandise sales and crowd reaction has to keep him on the roster in some capacity, right?

To Smackdown, it appears Corbin is now going to attempt to feud with AJ Styles which I can’t imagine him being the victor due to backstage heat as well on him.  According to sites such as Wrestlezone.com, Corbin has rubbed some people backstage the wrong way causing him to lose his Money in the Bank briefcase and getting destroyed by John Cena at SummerSlam in Brooklyn.  I’m not a big Corbin fan, but Smackdown has very few credible heels, so Styles needs an opponent now that Kevin Owens is moving on to Shane McMahon.

Speaking of Owens/McMahon, I love how they are building this feud.  Owens has a believable gripe with Shane O Mac and many are thinking this will lead to a Hell in the Cell match.  Given Shane’s age hovering around that 50 mark, should he really still be doing this?  His matches are quite entertaining, but I’m wondering if defeating the Smackdown GM does anything for Owens and his character.  They need something on the line like a future title shot to cement this match as something meaningful.

While I remain bored of Jinder Mahal’s WWE reign, I believe he’s going to hold it a while and make his loss significant.  I can’t help but feel that even with Cena on RAW, his free agent status will open him up for a return and defeat Mahal at a major show (maybe Royal Rumble?) where Cena can break his and Ric Flair’s championship record.  According to Wrestlezone.com, Cena is off shooting the film, “Bumblebee,” after No Mercy so a return to Smackdown after would make sense.  Mahal in the meantime is improving on the mic and his henchmen help build his character, but I am so tired of his “you stupid Americans” promo.  While anti-American is always a good way to get heat, I’m looking for a bit more substance out of Mahal.

I’ll get back to the WWE Championship picture later, but first, Bobby Roode and his GLORIOUS presence on Smackdown is much needed. His entrance, swagger, and character is an instant hit on the main roster, but can we use him, please?  Call me impatient, but I don’t think the best way to use this guy is to just put him in meaningless matches with no story behind it.  Yes, this is a reintroduction and showing off his move set, but let’s get him some mic time and establish the actual character.  NXT guys are all the same, they come up to the main roster and we are supposed to just know who they are.  The truth is, not everyone watches NXT, so I’d like Roode to be treated as a new person to the company and show off that character and establish him as someone that can challenge for the championship.  This dude is pushing 40 years-old, so we don’t have all the time in the world to have him fighting squash matches with Aiden English.

We had two big returns to Smackdown tonight. Shelton Benjamin teaming with his new tag team partner, Chad Gable defeated The Ascension (who hasn’t won a match in two years probably).  This was a fun match as it was good to see Shelton back on TV (although I missed his music), but I still don’t get why they are a team.  They were made a team because Daniel Bryan said so, which seems a bit odd.  Hoping for more here, but happy to see them back.

The bigger news is, FASHION FILES IS BACK!!!  After two long weeks Fashion Files had their season 2 debut on Smackdown.  These segments are getting the duo over more than any match ever could.  I still wonder when we’ll see them in the ring, but right now there is no room for them so it’s clever to keep them in this role.

Finally, while I found the main event kind of boring seeing Randy Orton and Nakamura team up to take on Jinder and Rusev, it was nice to see something build towards next week.  After Nakamura picked up the win, Randy Orton dropped Nakamura with the RKO and it was sold masterfully.

Smackdown continues to beat RAW in making you want to come back next week and the announcement of Nakamura vs. Orton where the winner challenges for the WWE Championship is all I need to be excited about the blue brand.  I expect Nakamura to take this one since we’ve seen Orton vs. Jinder 999,999 times, but expect Mahal to retain against his opponent no matter the victor.

That’s all for the recap this week.  Feel free to lay the smackdown in our comments section or on Twitter: @berkowitzb for your thoughts.