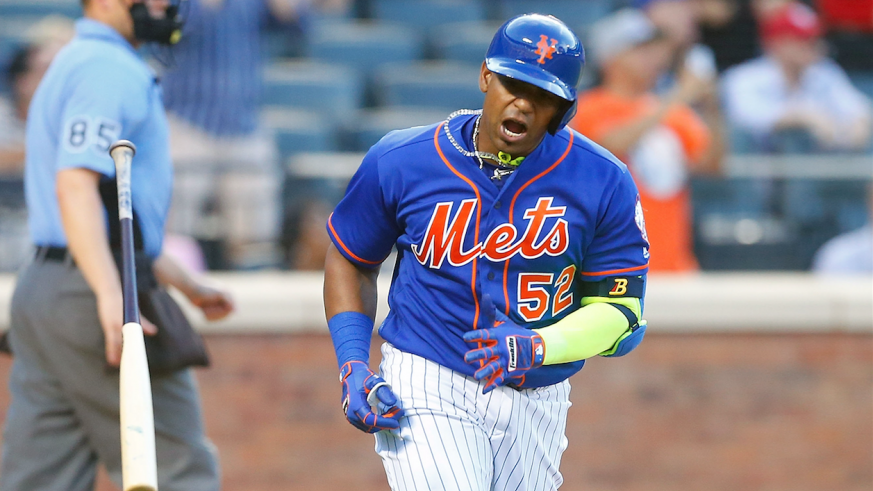 The Mets got off to a nice start this year taking two out of three from the St. Louis Cardinals. Losing yesterday, the Mets look to rebound Tuesday against the Phillies at home. I’m here to give you five bold, but possible, predictions for this year’s New York Met’s team. After a horrendous 2017 and World Series appearance in 2015, the Mets are one of the more intriguing teams going into this year.

1) Amed Rosario Will Either Win a Gold Glove or Become an All-Star.

Rosario is one of the most electrifying young players in the game. He showed off his gloved time after time last year and in spring training. I believe Rosario is a great breakout candidate with the mentorship of Jose Reyes and lack of pressure on him due to additions like Todd Frazier, Jay Bruce, and a healthy Yeonis Cespedes (hopefully). Reyes is an extremely close friend Rosario and has played an intricate role in his life as a mentor both on and off the field. For Rosario, it’s all him laying off of pitches outside of the strike zone as he has power, speed, and ability to hit for average if he stays disciplined.

2) Jacob DeGrom and Noah Syndergaard will be the best 1-2 Combo in baseball.

Maybe this isn’t that bold but I still think it is due to a couple factors. Noah is coming off a year where he missed essentially the whole season. DeGrom is coming off his worst statistical season ERA-wise posting a career-high at 3.53, which for him is bad. But I believe these two will feed off one another and are serious to show everyone they are the best 1-2 combo in all of baseball. Noah already dumped his ex-girl Alexandra Cooper and said “Baseball is his significant other” so he appears ready to buckle down. Look up Alexandra Cooper on Instagram though you’ll thank me later-smoke.

This still relies on the two of them being healthy for a near complete year and being extremely dominant. There are other really great 1-2 combos in baseball too like Scherzer and Strasburg, Kershaw and Wood/Hill, and Kluber and really whoever the second best in Cleveland is. So it’s still a tall order regardless when we delve deeper but I believe they will be the best.

3) Yeonis Cespedes will hit 40HR and Drive in 110 proving to be the Mets MVP.

Yup, I’m calling it. Cespedes will finally stay relatively healthy and play 140-150 games this season. I have to reason to believe this more than ever as he has done away with squatting 500lbs like a psycho and is now doing things like yoga. He say’s he’s never been more limber and he’s also given up golf which shows his dedication to the game of baseball. Now, this might not seem like a huge deal but being that one of his injuries last year seemed to have possibly occurred because of golf this is a good sign.

His best year was in 2005 in which he split with the Tigers and Mets. He hit 35 home runs and drove in 105 while batting .295. Now I will take those numbers any day of the week but I think he will have a career year and even surpass those numbers. Maybe he doesn’t hit quite 40 but at least 37-38, after seeing him crush a bunch in spring and golf one into left field at Citi field the future looks bright for Yo.

4) Jason Vargas will Prove to Be the MVL (Most Valuable Lefty) on the Mets and one of their Best Free Agent Signings.

The most valuable lefty for the Mets the past couple seasons has to be the underrated Jeremy Blevins. The lefty specialist who has proven to be more than that for the Mets is always reliable coming out of the pen. He posted a 2.94 era last year and 2.79 the year before with the Mets, Jerrys great.

However, I think Vargas was a HUGE signing for the Mets for multiple reasons. First off, he will be our lefty out of the rotation since I have lost pretty much all faith in Stephen Matz. I really like Matz he’s a competitive Long Island kid who I always root for and then some.  But he had a 6.75 ERA last year and although he said he was pitching injured he doesn’t seem much better this spring or in yesterday’s game. He could pull it together, but it looks like he’s lost speed on his fastball and that he won’t ever be the same pitcher which is sad. Between his inability to stay healthy and possibly lost talent it will be tough for him to pull through but I’m pulling for you, Stephen!

Vargas had an amazing first half last year and fell apart towards the end of the second half, however still compiled a very good season. Serving as the ace for the Royals his ERA ballooned to 4.17 by the end of the year. That’s right about where his career ERA has been 4.16. I look for him to improve a little being a solid third starter with a 3.7-9 era and 14 wins or so. He is also coming with his pitching coach from the Royals in Dave Eiland, who is now the Mets pitching coach. Vargas is currently on the DL recovering from a fractured non-throwing hand but threw a 65-pitch bullpen session today and should be back in a couple weeks.

5) The New York Mets Will Win 88 games and secure one of the Two Wild Card Spots.

This may be the boldest of them all, but ya gotta believe if you’re a Met fan! The Amazin’s have given me good reason to believe this offseason signing Frazier, Vargas, Anthony Swarzak, and perhaps most importantly getting a new manager in Mickey Callaway. I love Mickey and the young energy he brings. As he led the Indians to the best ERA in baseball and serves as a breath of fresh air for Met fans. Terry Collins was so atrocious only Met fans could understand, I’m not even gonna get into this because my blood is already boiling and I’ll be here for days.

The pitching staff is deep with 8 potential starters in Noah, DeGrom, Vargas, Harvey, Matz, Wheelers, Lugo, and Gsellman. Gsellman is currently in the pen which I like and I am high on Vargas and Harvey to have a solid comeback season. The two studs will obviously come to play if they are healthy and I’m not high on either Wheeler or Matz but there is still talent there. Our pen has Familia, Ramos, Swarzak, Blevins, and Gsellman so it is vastly improved as well.

The lineup looks so much better with a healthy Yo, Bruce, and Frazier hitting bombs and another year of experience for Rosario. Michael Conforto had an amazing year before a dislocated shoulder and should look to continue that once he comes back off the DL this Thursday which has sidelined him since last August. Brandon Nimmo and Juan Lagares give us good insurance in the outfield as well. Adrian Gonzales was also a solid pickup for around 550k if Dom Smith turns out to be a bust.

I like this team. We have potential in every aspect starting pitching, bullpen, offensively and even defensively as Frazier and Rosario are huge upgrades over what we had last year at those positions. The key as always for the Mets is to stay healthy and I think they can be, relatively that is. I think 86-88 wins is more than plausible and the Mets seek out the Cardinals and Giants for the second wild card behind the Chicago Cubs. Brewers winning that division-stay woke.