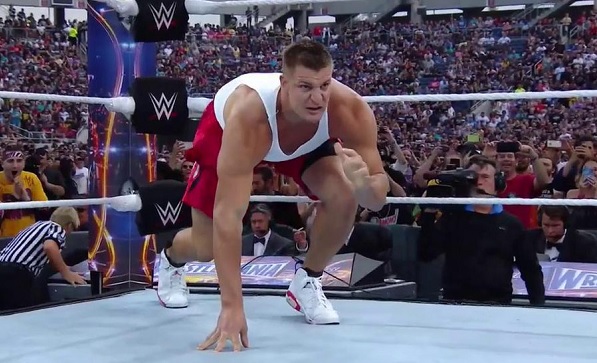 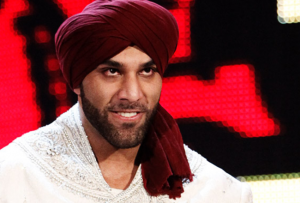 After Jinder Mahal threw a drink at Gronkowski during the early stages of Wrestlemania 33, Gronk retaliated by doing what Gronk knows best – getting in a three-point stance and launching his 6’6″ 265 lb. frame into Mahal, before stomping him out into submission in the ring. Hats off to WWE in actually bringing some natural athleticism into the ring, as Wrestlemania has always been the Super Bowl of WWE, and thus far it hasn’t disappointed.

Nevertheless, still feels like WWE may have borrowed some ideas from “It’s Always Sunny in Philadelphia”. Hear me out. I feel like Mahal merged DeVito’s character as the Trashman with rickety crickets character, the sand-slinging terrorist. And while the half-Indian, Canadian-born Mahal has played the role of a terrorist before, he was never known for throwing trash. That is because there is only one man who throws trash, and that is the trashman. Probably why your drink-throwing resulted in you taking a curb-stoping from #87. I’d love to see Danny DeVito make an appearance at Wrestlemania as the real trashman, throwing garbage everywhere and reminding the crowd of what the inside of their shanty smells like. What else can I say, I guess I’ve always been a dreamer.