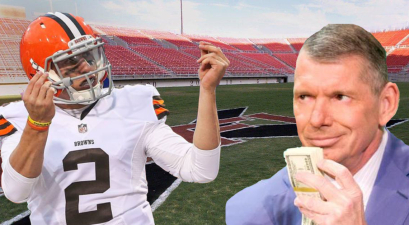 With the MAJOR announcement Thursday that Vince McMahon will finally, after 17 years be bringing back the infamous XFL. Johhny Manziel, being the motivated unemployed Quarterback he is, was quick to hop on board with his endorsement of the new NFL alternative. Quick side note here, can we please recognize that Johnny Manziel is still the LAST QUARTERBACK to win a game for the Cleveland Browns. He hasn’t played for them in two years. He also showed some real signs of success in those starts. Especially playing with that trash team in that trash city. I don’t think Manziel was ever given a fair shake in the NFL. That being said, here we sit, Manziel, unemployed, sober, working out every day and begging for a chance to play football, for anyone, anywhere.

Way to get out in front of it Johnny. Show everyone your motivated to prove yourself in any manner you can. Then came 3 pm and Vince got on the live stream and began fielding questions and said this:

Yeah, so that’s probably not the answer you wanted to hear if you’re Johnny Manziel. You would have hoped for a ringing endorsement like he gave Jesus Jr Timmy “takes too long to throw” Tebow. Face value by the looks of that statement, Johnny Manziel dreams are killed before they even got off the ground. But you are batshit crazy if you think Vince McMahon will hold Manziel completely out of contention for the XFL. I simply refuse to believe it.

Not only should Johhny Manziel be allowed to play in the XFL, he should be the NUMBER ONE PICK. Full disclosure, I don’t even think its decided how they will build the rosters, but if there’s a draft, Manziel is first off the board, by a mile.

Vince McMahon is arguably the greatest promoter in the history of the world. Yes, I said the world and I meant it. It’s hard to even argue with the evidence. He built the WWE up from nothing to a multi-billion dollar empire and one of the most recognizable companies in the world. He did it almost entirely by way of his own promoting skills. Our boy Johnny Football puts ASSES IN SEATS. Point blank. Period. From the day we met him at Texas A&M, Manziel has been a walking highlight reel. Must watch TV everytime he stepped on the field and arguably, even more, entertaining off the field. Sure, some of that off the field stuff may have been part of Manziels demise, but it was also just as much a part of his rise.

Vince is a super smart guy and as I mentioned a promoter second to none. There are no more chances with the XFL, this is it. Vince has to make it work this time around, he has no choice. He doesn’t have time to take the moral high road. He has $100,000,000 at minimum riding on this. You really think Vince is going to let that type of money hang in the balance and sign up Matt Leinart, Jason White and Chris Leak when Johhny Football is begging to lace it up for him? NO SHOT.

Manziel could be the number one ticket in town and paired with Vince could make the XFL a ticket in town for years and decades to come. The XFL is about everything that Johnny Manziel is about and vice versa. Vince can say all he wants that the XFL will focus on people over talent, but we all know that only lasts as long as the bottom line stays out of the red. If Johnny Manziel ever wants to play in the NFL again and Vince McMahon ever wants to get the XFL off the ground, they will help each other out and cement the most perfectly symbiotic partnership to possibly ever exist in sports history.

Do the right thing Vince, listen to the fans. You said you will give us what we want and all we’ve ever wanted for the last two years is Johnny Fucking Football.

Johnny Football and the XFL, has there ever been a more perfect match? (@bleacherreport)