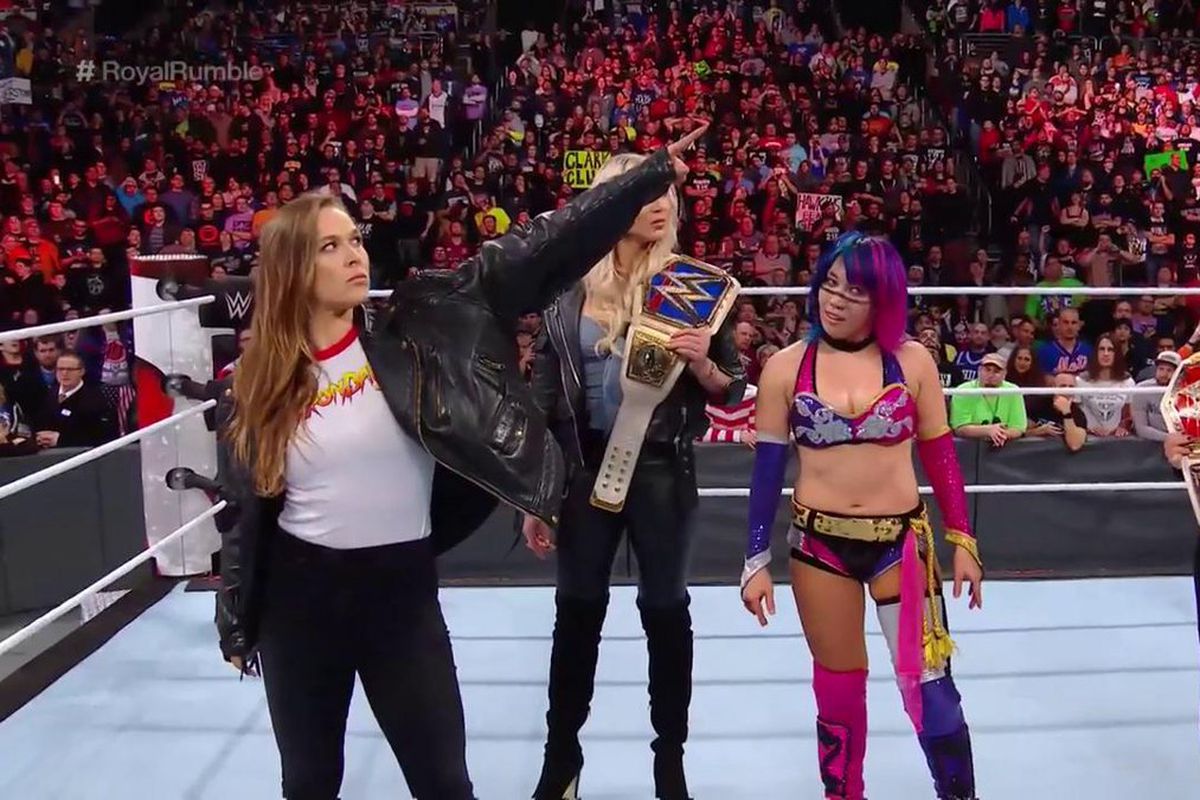 Trailblazing UFC women’s bantamweight champion Ronda Rousey has agreed to terms with WWE to perform for the company as a full-time professional wrestler. Rousey made a surprise appearance at the WWE’s Royal Rumble pay-per-view in Philadelphia on Sunday night. After the conclusion of the first-ever women’s Royal Rumble match, Rousey emerged and shocked the crowd. Ronda Rousey is putting the MMA world behind her as she begins her new endeavor with the WWE. Brett Okamoto reflects on her legacy and the imperfect ending that mixed martial arts fans are stuck with at this time.

“This is my life now. First priority on my timeline for the next several years. This is not a smash-and-grab; this is not a publicity stunt,” Rousey told ESPN’s Ramona Shelburne of her decision to join WWE. “When I first met with Triple H, I told him, ‘There are other things I can do with my time that’ll make way more money, but I won’t enjoy nearly as much.'” It could not have been a more dramatic moment, in terms of the world of WWE. After Japanese superstar, Asuka claimed victory in the women’s Royal Rumble match, WWE women’s champions Alexa Bliss and Charlotte Flair entered on either side of the ring. Suddenly, Joan Jett’s “Bad Reputation” blared through the PA system and Rousey’s name appeared on the screen.

She stepped into the ring, pointed to the WrestleMania sign, shook Stephanie McMahon’s hand and officially stepped into a brand-new world. “I don’t have words at all,” Rousey told Shelburne of her experience Sunday night. “I’m like — this is the most overstimulated I’ve ever been in my life and … I’m just like I’m still processing it. “I’m so happy and I don’t have words for it — and I usually have words for everything; This never happened before.” H/T – ESPN

ROWDY @RondaRousey is HERE in Philadelphia at @WWE #RoyalRumble!!! pic.twitter.com/Aue3HOrJIT

It seems @RondaRousey ALSO wants to go to @WrestleMania…#RoyalRumble pic.twitter.com/yha3PGBPL8

Everyone's eyes are on #WrestleMania 34…

Going into Sunday’s Royal Rumble event, the rumors were swirling about this. Ever since Rousey took her step back from UFC following back to back losses in the octagon being added to her previously unbeaten record, this is a move that’s been talked about. It’s being met with some heat, but personally, I love it. At times in her career, I haven’t been the biggest fan of Rousey. For example when she said she contemplated suicide after her first loss in the octagon. It was such a joke. Suicide isn’t a joke, but her saying she thought about suicide after a loss is a joke. People have real problems. Losing a fight for a million dollars doesn’t get you on my sympathy train. Pick your ass up and figure it out. You don’t get to piss and moan because you’ve never lost before and don’t know how to handle it. That’s not a valid reason for anyone to feel bad for you.

Aside from that though, Rousey has done everything right in her career, both in and out of the octagon. She’s made some movie appearances, accomplished everything she could have in her sport and has come out a very popular, rich and healthy woman. That’s to be applauded and celebrated.

A Rousey – WWE partnership is a match made in heaven. She’s a star. Puts asses in seats just like Johnny Manziel. She’s personable, has major experience in the spotlight and has some acting gigs under her belt. There’s nothing she will fear doing in the ring. She is in peak physical shape. Rousey is the full package. Anything and everything the WWE is looking for in their Superstars today.

Rousey herself doesn’t have anything else left to prove in the UFC. As far as we’re concerned she doesn’t have the ability anymore to compete the way she did in the UFC. Her time in the Octagon is over, she needs a new gig. What better to do when you cant win a real fight anymore? Join a television wrestling show where the outcomes are pre-determined based on your popularity. The craziest part about this is, this will make Rousey bigger than ever. She will be propelled to a new level of stardom. The UFC is peanuts compared to the WWE. The reach of the WWE is truly world-wide. The UFC cant provide her that type of exposure. Then there’s the physical aspect. Sure, the WWE is physically demanding, but at least she’s not getting her face pounded in for real anymore.

It will be interesting to see what type of role or character Rousey carves out for herself in the WWE. Will she be a heel? A crowd favorite? Will she act close to the real Ronda Rousey or will she create some type of entirely fake persona? My imagination is its somewhere in the middle of all of that. It wouldn’t be smart to dilute her entire pre-existing brand completely, but it also would be equally as stupid to make her the exact Ronda Rousey she’s been known as up to this point. This is a move that makes perfect sense for the both of them. A move that will make Ronda Rousey into a true household name across the planet. She was a superstar before, but that’s not the same as the WWE Superstar she’s about to become.

Joel Embiid Trolls Russell Westbrook Hard in Post Game Instagram After Posterizing Him
Video: The Official “Haters Guide to the Super Bowl” is Back Again to Make Everyone Laugh
To Top