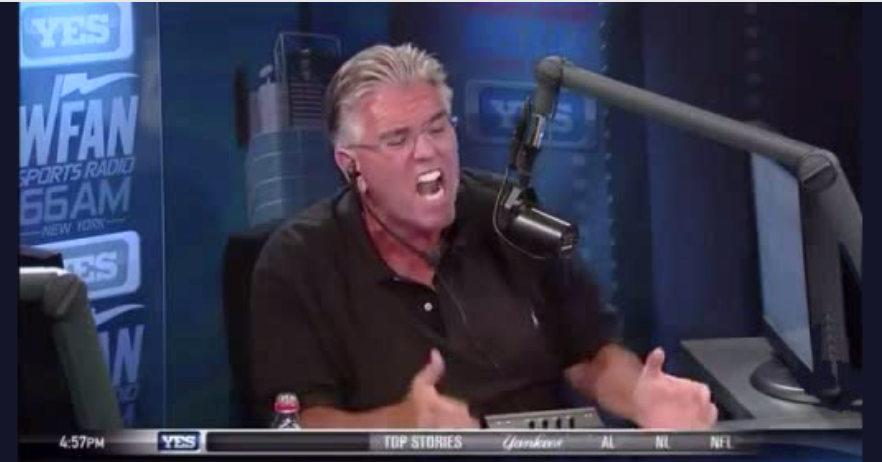 Mike reacts to the press conference of Ben McAdoo and the reasoning of why the Giants are benching Eli Manning in favor of Geno Smith.

Man, Mike Francesa still got it. He’s still NUMBAH ONE. This is a rant for the ages. A classic from start to finish. Despite inching closer and closer to retirement by the day, Mike still has the drive and anger to bury someone when they truly fucked up. And he doesn’t just go after Ben McAdoo. He ruins McAdoo, GM Jerry Reese and Owners Mara and Tisch. Which is valid because every one of them had to sign off on this for it to happen. Which is just flat out unacceptable. Even if you want to claim the one argument saying this is a move to tank, I’m not buying it and I’m not accepting it. Eli was doing everything he could with what he’s been provided.

What QB in NFL history has been successful losing his top 4 receivers, having the worst rushing game in the NFL, arguably the worst offensive line in the league, a coach who cant draw up a game plan if he had to trace it out of a stencil and a GM that was so stupid he couldn’t even recognize and rectify any of previously stated issues? The answer is a resounding NOT A SINGLE FUCKING ONE, ever.

I’ll give the owners somewhat of a pass here because in almost every other instance they have been smart, decent and overall everything you could ask for in an ownership group. As for McAdoo and Jerry Reese, even if you were told to do this directly by an owner, have some fucking pride and say no. Stand up for what you believe in and stand up for the people whose hard work and accomplishments allowed you to exist. Eli Manning is all of that and more. With the truest words Mike Francesa says throughout the whole rant, without Eli Manning, neither of you is employed and neither of you exists in the NFL. But you’ve made your choices and New Yorkers have made theirs and we can’t run you out of town fast enough.