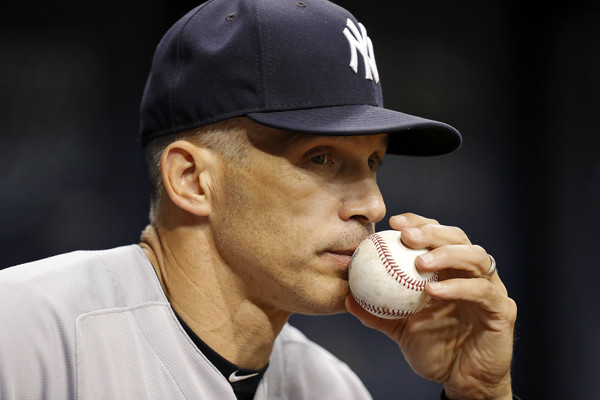 Since joining the Yankees,  Joe Girardi has done nothing but meet or surpass expectations. While his wins and total championships may not equal Torre or other Yankee Managers, one could argue he’s done more with a lot less. What he did with this team this year might have been his 5th symphony. Baseball managers don’t normally tangibly impact games too often, but this year it seemed like Girardi did all the time.

He brought this young team together. He had the right veterans in place and gave everyone a fair shot. He got everyone to “all rise” (couldn’t resist) to the occasion. Joe Girardi brought this team of young studs who wasn’t supposed to make the playoffs to within a game of the World Series. Impressive to say the least and for that, I think he should at least be in the conversation for Manager of the Year. What if I told you that Joe Girardi was the first manager to ever get fired after winning Manager of the Year? Well, I am telling you that because its a fact that happened in 2007 when he was fired in Miami.

What I’m also telling you, is that if Girardi were to win Manager of the Year, he could also become the second to be let go following the winning of that award.

A source Bleacher Fan spoke with from within Joe Girardi’s camp and direct knowledge of the situation, said that Girardi has been told by the Yankees they are leaning towards not renewing his contract, which is up this offseason. There was no indication on when a final decision would be made or when it would be announced. Nevertheless, the source confirmed that Girardi is not expecting to be offered a new contract, thus ending his successful Yankee managerial run.

While there is initial sticker shock here and frankly, I’m not too thrilled about it, after taking a logical approach, I can wrap my head around it under certain circumstances. Face value you think, how could they not bring him back? After the season they just had and the amount of young talent the entire Yankee system is overflowing with? They’d be letting go a manger beloved by a core of players that will most likely be in place for the next decade. All valid points. But what if…

What if Girardi wasn’t able to or didn’t want to commit long-term? What if he had legitimate wishes to possibly manage elsewhere? What if he wants to retire now to spend more time with his family? From what we understand now, the only one that seems possible to me is him not willing to commit long term. That’s also probably the most acceptable and likely answer to this report. This Yankee team has a young solid core, with a laundry list of others waiting in the wings. From the Yankees point of view, keeping them together and happy is priority one. A manager that can captain that ship for the next decade is what the team should be looking for. If Girardi has in some way indicated that he can’t be that, then this is painful,  but ultimately the right move.

If the Yankees do finally elect to go in a different direction, it will be intriguing to uncover the details of the thinking behind the move. Either way, Joe Girardi will always be remembered as one of the best career Yankees of all time and forever beloved by the fans and the city of New York.

If it comes out that Joe Girardi said he left by choice to go manage somewhere else, like the Miami Marlins? Then you can pretty much forget everything I said before. Yankee fans don’t appreciate being betrayed. And make no mistake about it, a choice to manage the Marlins over a Yankee team poised to contend for World Series titles for the next decade is an unforgivable betrayal in the minds of Yankee fans.

If this is all the Yankees choice for the reasons I listed above, then I wish Joe all the best and hope to see him at every Old Timer’s Day from now until he heads upstairs to hit dingers with Ruth, Gherig, DiMaggio, Mantle, and Maris. But if he made the conscious decision to leave the Yankees for another skip job? They might as well erase him from Yankee history in my mind. Time will tell, but, as of now, it doesn’t seem likely Joe Girardi will get the opportunity to continue raising the Baby Bombers.