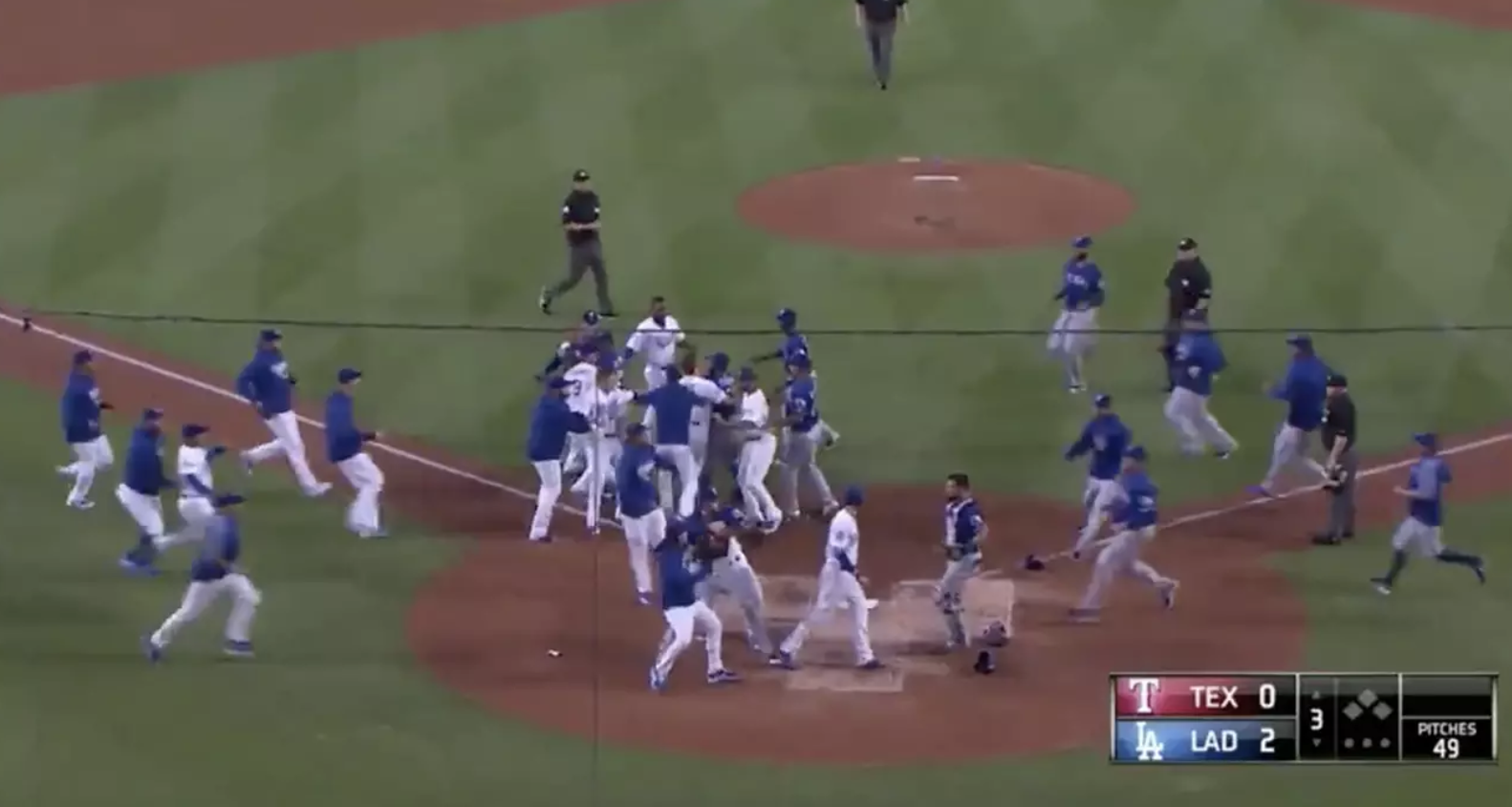 Aside from hockey baseball is really the only place we have a chance at legit fights and brawls anymore. The NBA is soft as shit in that regard now. 20 years ago, it was the total opposite, but now everyone’s got a huge mouth and completely non-existent fists. Similar to the rap game. Wednesday night we saw a budding fight in baseball turn NBA soft real quick, except the reason behind the fight was even softer. Check it out:

Collision and a fight at the plate let’s GOOOOOO pic.twitter.com/akHii9tcxn

So basically this catcher got mad because Matt Kemp obeyed the rules? That’s exactly what we all just watched. Yes, the rules changed a few years ago so that you can no longer take out the catcher whenever there’s a play at the plate. Those rule changes also state (paraphrasing here) you are allowed to run over him like a bulldozer if the throw forces him into blocking the path to the plate. What happened on this play? Oh, yeah exactly that.

The Rangers catcher has no one to blame and no one to be mad at other than his own teammate who made the errant throw into the plate. Matt Kemp did exactly what he was allowed to do and exactly what he should have done. In fact, this catcher should be thanking his lucky stars that Matt Kemp didn’t knock him to the moon. Kemp clealry let up a bit right before the contact.

Does the catcher take pride in his position and take the hit like a real catcher should? Does he make the play and be happy he got the out and stare the batter down because he just withstood his hit? No on both accounts. He gets up and throws a temper tantrum because the big bad baseball man knocked him over, got some dirt on his uniform and that wasn’t nice! No self-respect. Basically spitting on some of the toughest legends ever to play the game before him. Every catcher that ever took a hit at the plate and protected what he was hired to protect.

If you can’t handle the responsibility that your organization pays you millions of dollars for, then try your hand at something else. A reaction like that is shameful, there’s simply no other way to put it. No rules were broken, no dirty plays were made by Kemp. The dirtiest play was the shove made to start the fight because the catcher didn’t have the balls to play his position under the written rules. Starting a fight because you got knocked over isn’t pride. It’s not tough. Tough would have been eating the hit like you did, making the out like you did and standing tall on top of home plate letting everyone else know you will protect what you are paid to protect, at all costs.

Video Surfaces of Draymond Green’s NSFW Dissing of Tristan Thompson After the Finals
What if I Told You the Best Thing Happening With the Mets was a Minor League Bat Flip?
To Top