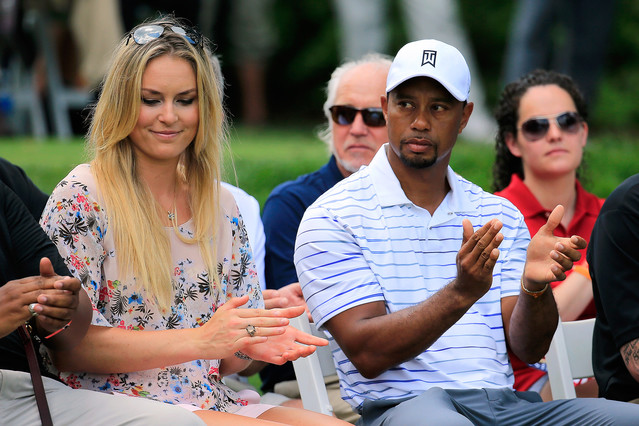 Tiger Woods is threatening to take legal action after a nude photo of him leaked online, TMZ has learned. Woods was just one of a number of celebrities who recently discovered that private images from their phones found their way online. Miley Cyrus, Stella Maxwell, Katharine McPhee, Kristen Stewart, and Tiger’s ex-girlfriend Lindsey Vonn were also hacked.

Woods has already enlisted the services of attorney Michael Holtz who has told the website Celeb Jihad to take down the images. McPhee also hired a lawyer who has issued a similar threat. TMZ is reporting that the leaked photo was obtained from Vonn’s phone. H/T – Complex

This is a tough break for Tiger Woods, even tougher for Lindsey. Some celebrities in the Fappening got off pretty mildly, some got it pretty bad. Lindsey Vonn got it REAL bad. I’m not gonna get into detail, but there is not a single thing left unseen in the pictures…or the videos. While this is unfortunate, what a crazy ironic way for this to happen to Tiger.

Look, let’s be honest here for a second, Tiger Woods was banging every girl east and west of the Mississippi for over a decade. We’re talking literally hundreds, possibly thousands of rendezvous with different women. From all accounts of these women, Tiger was never in any way “shy.” In other words, this was far from the first dickie sent by Tiger. The ironic part is, these pictures weren’t turned in by one of the hundreds of girls who came forward in the adultery case. It wasn’t some disgruntled stripper or prostitute he forgot to tip. Not some random bar girl or waitress looking for revenge after a one night stand. Nope, none of those.

Tiger, the ultimate cocksmen of the modern era, got his nudes leaked by dating a beautiful, famous, talented, well-respected and intelligent individual, who also happens to be a Gold Medal-winning Olympic athlete. He got burned for doing all the right things. For being with the one girl in his redemption run he can be proud of. This is why Tiger is the way he is. When he does things his way, things workout. He wins majors and everyone (besides his ex-wife) are happy. He finally gets his life back on track, starts dating a great girl who has everything you could ask for in a woman and boom, he gets exposed. The irony is too real. At this point Tiger, you might as well embrace it. Now that it’s out there, it’s out there, might as well sit back and wait for the potential RIO roll in.

P.S. We just gonna ignore the fact that Lindsey Vonn still has Tiger nudes on her phone years after they broke up? Either he’s still hitting that or he hit that so good, she couldn’t bear the chance of forgetting. Tiger remains undefeated.

Chandler Parsons And Blake Griffin Continue Their Bromance By Invading Costco
WWE: Road to No Mercy Begins
To Top