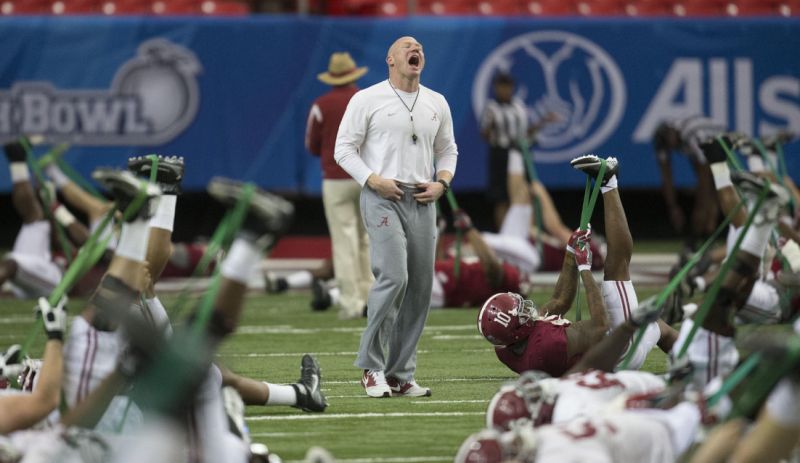 After getting its revenge on Clemson, Alabama had no need for last year's runner-up trophy (NSFW language)
(📹: jeudy_4/Snapchat) pic.twitter.com/x9mC1RJLHX

Welp, don’t need that old thing anymore. Second place? The hell is that? At least that’s how the Tide rolls at Alabama now. Sure this sounds cool, the motivation factor is there, I get it. Not really, but let’s pretend I do. But how much more stereotypical of a strength and conditioning coach could you be? Just screaming curse words and smashing things in some attempt at an ad hoc motivational coaching movie moment. Regular Billy Bob Thorton this guy.

I gotta tell you though. In the moment this might be something I look past just cause everyone else is fired up, but if I was a player on that team last season I am PISSED deep down. Dude, do you know how hard it is to be the second-best team in the country? like almost impossible. I get that your goal every year is to win the championship, but really? We’re just gonna smash to pieces everything earned that season for a gaff? Beating the piss out of almost 400 Division one football programs and losing on a last-second touchdown is just ehh now?

While I’m not saying strength and conditioning coaches are useless, I am saying that they come a dime a dozen. Blue chip prospects that except on the field do not. How about you run it by the guys who earned that trophy before you get your roid muscles out in a fit of fake rage to try and make yourself seem important to the team before you smash the trophy to bits.

Sit back hit a joint and think up some creative ways to help beat Georgia in the championship game because less than a week out, lifting heavy things and smashing silver medals isn’t gonna cut it.