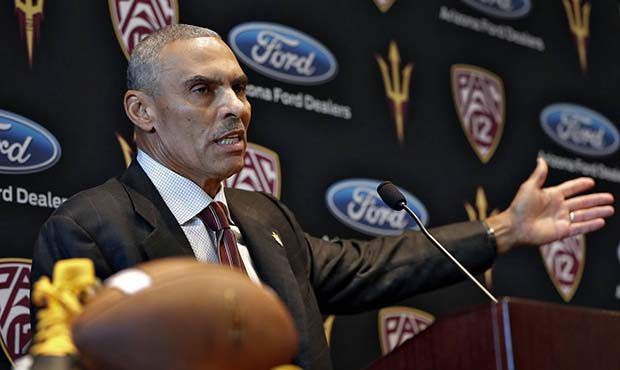 Well, that was painfully awkward. Am I the only one who thought this Herm Edwards hire was a really weird hire from the getgo? None of it made sense from the start and then boom out of nowhere Herm Edwards after like a decade out of coaching, is all of a sudden heading things up the nation’s number one party school.

Then he gets all signed sealed delivered and he doesn’t even know the name of the school’s fucking mascot?! Not a good look Herm. Either way you look at this, it’s not good. Option 1 is he legitimately doesn’t know the name of the school’s team, which is bad. Option 2 is yes, somehow actually worse. He is getting old and so out of it, he didn’t realize what the question was being asked and was completely clueless. Forgetfulness and naivety are not two qualities you’re looking for in the guy you just hired to run your major football program. A program and job revolved around identifying and connecting with 18-22-year-old kids.

We know Herm for his infamous press conferences. His witty and quotable outbursts. Some of which will live on forever, but over a decade out the game and he’s clearly gotten a little rusty. It was like watching Peyton Manning in his last season in Denver. Equal parts sad and confusing. Let’s hope being around the youngins at Arizona State kick Herm back into gear. Take him out of the grandpa state of mind he clearly has entered. Maybe this is a Field of Dreams “Ease his pain” situation, Arizona State thought they needed a new head coach. They thought they found the perfect man to fix their program, but in the end, they weren’t trying to build up their program to help the school, they are helping Herm Edwards.