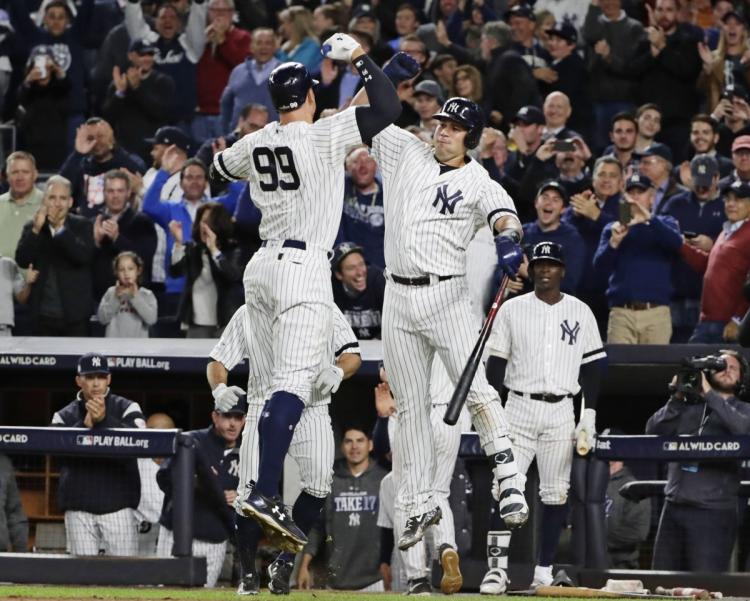 Man, this is hard for me to say – but I’m here to tell you why there’s no good plausible reason to hate this 2017 New York Yankee Ball Club.

Let me first off say that I have been a die-hard Met fan my entire life, born and raised. Growing up in New York it ain’t exactly easy either, being that is the Mets pretty much manage to fuck up everything. From the management to coaches, contracts, to injuries, we just can never catch a damn break. I’ve witnessed two World Series appearances and two losses, one to the damn Yankees. It’s as if the Mets have always been the little brother to the Yankees even when we’re good- we just can’t get over that hump.

The Evil Empire has pretty much been the mecca for New York Baseball ever since I was born. I’ve witnessed Roger Clemens drill Mike Piazza with a 98 mph fastball and mayhem ensue. I’ve seen the Yankees sign almost every big name free agent from the likes of A-rod to Jason Giambi. Two of the most hated men in baseball of their time, also two of the best sluggers of their time.  It was if they would just sign the best player and biggest douche all in one by just outbidding all the smaller markets. This infuriated me that they would just buy their teams. It’s easy to see my dis-contempt for the Yankees.

But this team is quite the opposite of the stereotypical Yankee team. This team was built from trading those big-name stars and free agent signings-the Carlos Beltran’s, Andrew Millers, and Aroldis Chapman’s of the world. The team is young and full of exceptional talent and I’ve been waiting for them to slip up or show their immaturity due to youth, yet they’ve kept stride and have shown humility throughout the season.

Aaron Judge has had a roller-coaster but terrific season and has remained a class act, who comes off as a very likable player and person. He doesn’t showboat just puts his head down after every single home run.Tuesday night was the first night you actually saw him show emotion after his laser he sent into the left-field stands, and it’s hard not to be happy for him.

Also, what can ya say about Didi Gregarious? It is near impossible to replace a franchise player such as Derek Jeter in New York and he has done an admirable job at the least he somehow manages to go under the radar. He has also done this with great class and maturity, which is crucial under the bright lights of New York. Brett Gardner is a complete savage, who, if on your side will run through a wall for you. Luis Severino exemplifies a fiery young flamethrower who’s competitiveness and exuberance got the best of him Tuesday night. After an amazing season, you had to feel for the Dominican Severino, who wanted nothing more then to answer the call for his ball club and pitch lights out as he has been all year to this point.

And Jesus Christ this Yankee bullpen is just UNREAL! I’ve watched the Yankees and I’ve known how good this bullpen could be, but I don’t think anyone was expecting this. Just one earned run over eight and two thirds inning…umm what?! They were all great and I knew Robertson being the vet that he is would rise to the occasion, but 3 innings for the ex-closer? Sheesh. And someone needs to give this guy Chad Green a pay raise cuz this dude FUCKS. This guy has been lights out all year and saved the day again tonight in the very early-middle relief role. Even though he gave up one run he was a strikeout machine fanning four in two innings, he had New York in a frenzy and is a hometown favorite.

Lastly Joe Girardi is the puppet master who seems to pull all the right strings. Especially in a game where his stud pitcher had a meltdown and couldn’t make it out of the first inning. Girardi remained poised and so to did his team follow suit. On top of this Girardi is a great guy who has been a constant professional at separating his emotions from baseball. (See his benching of Alex Rodriguez as example.)

I really can’t hate on these guys any longer-and trust me I’ve tried. But they just they seem like genuinely good and humble dudes who have been developed in the Yankees farm system- NOT BOUGHT. Now I’ll admit I hate C.C Sabathia cuz I think hes a fat fuck, no I know he is, I just cant comprehend how he can even compete in an anything athletic, let alone a major league sport. Aroldis Chapman seems like a hot head and has had a troubling past, to say the least. But even he was so bad this year its almost nice to see him comeback and do well.

Then I really don’t dislike any of the other Yankees genuinely for who they are unlike those teams with Clemens and Giambi, who had controversial figures that they bought, were juice-heads, lied and just seemed like straight scumbags at the time. The most shit talking I can do now to my Yankee friends has come to “the umpire is better at stopping balls in the dirt than Gary Sanchez is”. While this is very much true he’s not a bad guy either, he’s the best power hitting catcher in the game already but can not stop a ball in dirt for the life of him for some weird reason.

The stadium was electric Tuesday night, from the first pitch, to Did’s tying three-run shot, to Judge’s rocket in the fourth to Chapman closing the door in the ninth. Even through all this, I can’t say I’ll be rooting for the Yankees against the Indians sadly, but I won’t be hating on them like past teams. I respect this team as should everyone, they really do play the game the right way. They play with great energy, passion, and have a grind it out attitude that embodies what New Yorkers are all about.

Who knows if they get past the Indians and make it to the series maybe I too will be drunkenly swaying and singing along with my fellow New Yorkers’ “Start Spreading the News!” Nobody from New York has hated the New York Yankees more than me, many can vouch for that, but I’m here to tell ya this ain’t your father’s Yankees- so sit back and quit sipping the hatterade. It’s taken me a long, long time, but better late than never right?

The Yankees May Have Won But Gary Sanchez Got Hit With An L Where The Sun Don’t Shine
Kenyon Martin Calls Out Jeremy Lin For His Hair, Lin Proceeds To Put Him In A Bodybag
To Top