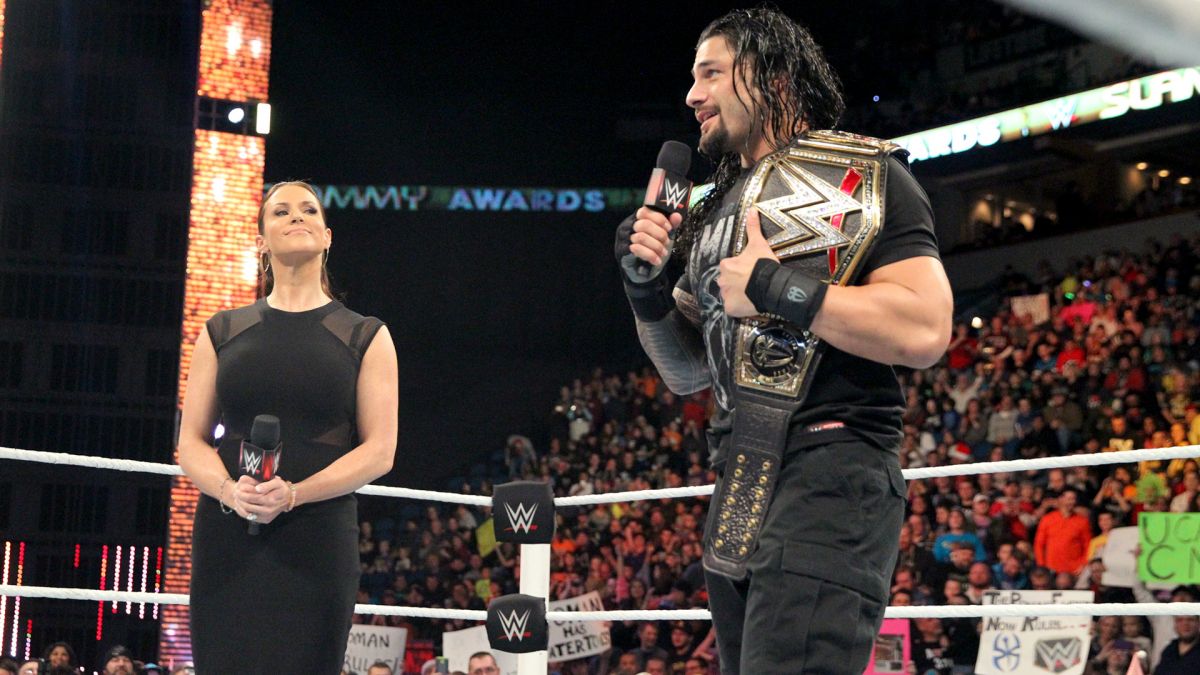 The dust never has time to settle in the WWE.  Once WrestleMania 33 wrapped, the Monday Night RAW and Smackdown Live after ‘Mania took over our screens the next two days with a raucous crowd, NXT call ups and returns making these nights as memorable as the biggest show of the year.

RAW kicked off with loud chants thanking The Undertaker after what may be his final match.  Eventually, the music hit for Roman Reigns and a loud and appreciative crowd turned into a pitchfork mob when the superstar emerged.  Reigns teased speaking for what felt like thirty minutes and the crowd never quieted with boos and chants of “Roman sucks!”  Reigns eventually simply said, “this is my yard now,” and walked away to a deafening round of boos once more.  Perfect execution and a great way to get Reigns out there and look dominant.  Now, if this isn’t a time to turn Roman heel I don’t know what is.

The Hardy Boyz defended their tag team gold against Anderson and Gallows making it the third night in a row this 40-year-old tag team competed (two ladder matches on WrestleMania weekend and one on RAW).  I’m not sure how the Hardys are competing at this high level so many nights in a row at their age, but WWE will hopefully give them a bit of a break before their next match.  In any case, Matt and Jeff Hardy picked up the win in a fun match, however, I’m still waiting for their first official on-screen promo to see what their return will truly be.

The first big “surprise” of the night came when The New Day called out anyone in the back to face them (which was done to death).  Out comes The Revival from NXT to defeat The New Day and join the RAW roster.

Vince McMahon came out to a crowd singing his “No Chance in Hell” theme song and announces that “it’s time to shake things up again,” he said.  Next week’s RAW will feature a Superstar Shake-Up which no details are given as to what that means but it appears it won’t just be another draft.  Basically, if you’re pumped Revival is on RAW, maybe they won’t be by next week.

Brock Lesnar and Paul Heyman came out challenging Reigns, however, Braun Strowman came out instead.  This wasn’t anything special and I’m quite confused who Lesnar is going to take on at the next PPV.  Maybe WWE is too?

McMahon also announces a new GM to take over RAW will be Kurt Angle (YES!!) who brought back his old school comedic style instantly with his interaction with Enzo & Cass (“That’s not how you spell “soft”).  With the Olympic Hero back, it’s true it’s damn true, all the pieces were set up for one more memorable moment.  Chris Jericho was supposed to team up with Seth Rollins to take on Kevin Owens and Samoa Joe but Jericho was attacked by his opponents prior leaving Angle with the task to find Rollins a new partner.

Enter Finn Balor.  After missing action since August due to an injury at the hands of Rollins, Balor is back to team up with the man that injured him.  Since Rollins is a good guy now, that injury is all but forgotten by Balor.  The match was entertaining and the big moment was Balor hitting his signature Coup de Grace to pick up the victory.

Moving on, the much shorter (and thus better) show, Smackdown, featured surprises of its own.  The show opened with setting up a tag match and featured a return of Eric Rowan (and his cool new mask) to help out Bray Wyatt and after chaos ensued, the two would be put in the main event match against former Wyatt Family members, Randy Orton and Luke Harper.

There was another classic challenge of anyone in the back to come out by Curt Hawkins.  This was to set the stage for Tye Dillinger who came out and the crowd freaked out doing their “10” chants for the “Perfect 10 athlete.  I’m not so familiar with Dillinger, but this “10” thing is super over with the crowd.  While he was in NXT, these chants were all over the main shows.

Let’s talk about the biggest moment of the night when Shinsuke Nakamura debuted on Smackdown.  The Miz and Maryse started off the segment dressed as John Cena and Nikki Bella mocking them once more for taking time off.  As they prepared to leave the ring they were interrupted by a man playing violin which could only mean one thing, The King of Strong Style.  Nakamura entered to an eruption by the fans singing his song and screaming for joy.  I’m not sure if this was to signal a definite rival for The Miz next or if this was just used as a good time to debut but with the Superstar Shake Up approaching, nothing is for certain.

The main event was lackluster to me featuring the new champion Randy Orton.  The main highlight is that Bray Wyatt can now teleport when he’s in trouble to outside the ring, sacrificing Rown to the RKO.  The only other memorable moment was Shane McMahon coming out to address next week’s shake-up, however, he gave no additional details and was interrupted by AJ Styles to show his respect for the Smackdown Commissioner by offering a handshake for their match.

Overall, both shows brought a lot of surprises and excitement for the fans.  Given that there were over ELEVEN hours of wrestling this week, it’s tough to truly make everything great, but the WWE did as good a job as possible to give the fans what they wanted.  Let’s hope they keep this momentum up going into what is normally a lull in programming.